Soo my dear Readers I am back again! haha

Anyways  to continue the flow! After i parted from my fellow Volunteers , me and Aljosha hopped into the car , which the Geothe-centrum hired , which would bring us back to Yerevan. Twas a esimated 7 Hour drie… and the assumtion was correct haha. It was a very good drive though! We talked abit with the driver, who could speak only russian, and turns out he brought Camilla ( the volunteer working at the place we stayed ) there last year so that was a interesting fact. The day we left it was streaming rain and it ws the first time ive seen alot of rain so it was a mixture of like panic , because i thought that the drive would be much longer, and happyness beacuse i saw rain again. But we reached the border in around 3 Hours, passed both Immigrations witithout control and continued our drive. Not gonna lie but i must say that i felt kinda at home as soon as we crossed the border haha. The landscape had also chnaged completely! There was snow like crazy and it was snowing aswell , I was really suprisede how the little time outside the country had changed the weather so much. But! We drove on haha didnt really matter as we both know 😉 just wanted to be dramatic haha.

When we arrived around Yerevan the driver started talking how hes gonna treat himself to some good ass food and vodka with his pay so that was prettz cure, but we finallz arrived, got out , I payed him ( I would get the money back) and crossed the street to the Flat. When we entered , we where both pretty exhausted so we kind a just kept to ourselves and chilled since we did just complete a 7isch hour drive so that was the end of Friday.

Saturday started early. I got up at 8 to get a good breakfast and pack up my things into my backpack again and after some walking and a subway ride i arrived infront of the Goethe-Centrum at 9:45. There i packed my bag into the bag of the ordered sprinter which would bring me and the others onboard to Gymri. So to explain everything: There would be the opening of a new PASCH programm SChool and following that the “ Childrens University programm“ in the city of Gyumri. And i would be transported there in the Sprinter bus with Karen and some Parents of the children participating from the other Schools.

The moment i entered the bus is was just the Women talking loudly haha, like it was horrible ( I know it sounds kinda sexist but its what happened haha) Now but basicly i stayed quiet for most of the ride and enjoyed my peace and quiet with my headphones on. I should really make a playlist on here with the songs i enjoy, i have been told alot by people that my taste n music is very magnificent and unique ( which means good haha ). So we arrived at Gyumri at around 12 isch wich was on schedule and so me and Karen unpacked our gear ( mostly beamers and IT stuffs for the Project) . Now after that, we more important people starting collecting at the school aswell. Dana arrived with all the delegates from the other PASCH schools in Armenia. Finally the german Ambassador pulled up with his son and the Honourary Consulate also showed his face. We where firstgiven a small tour of the schools main building before gathering infront of the school where after a few speeches and after a count of three, the official “ PASCH School Plate “ was unveiled infront of the school. Here two pictures of the official ceremony xD : 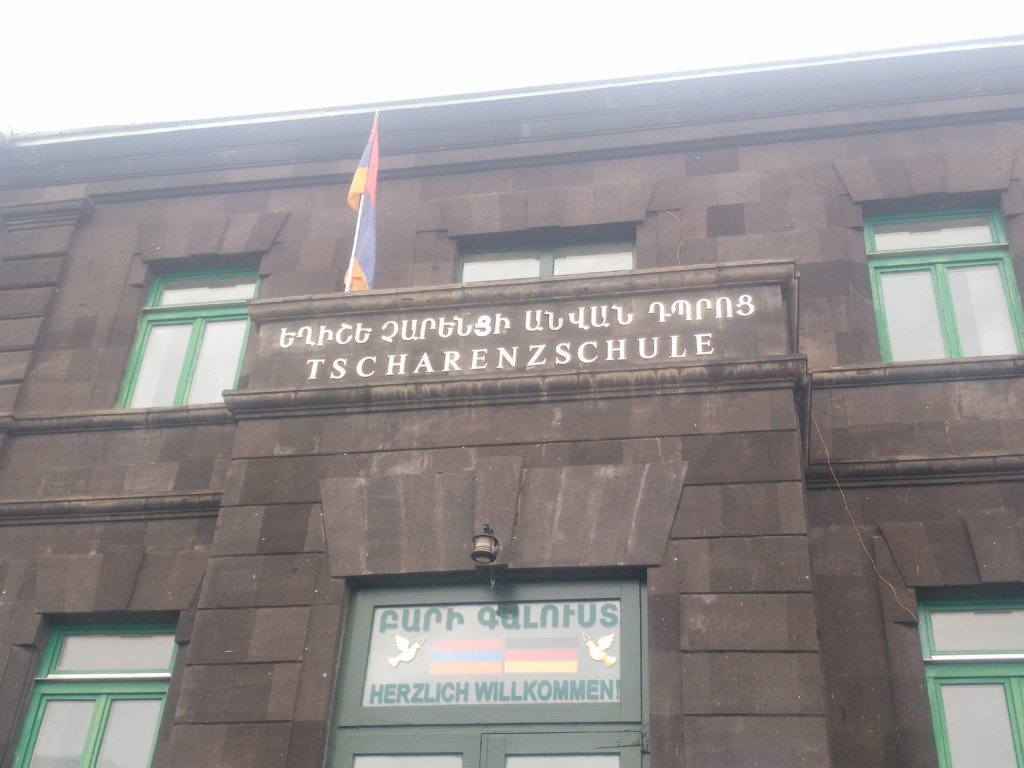 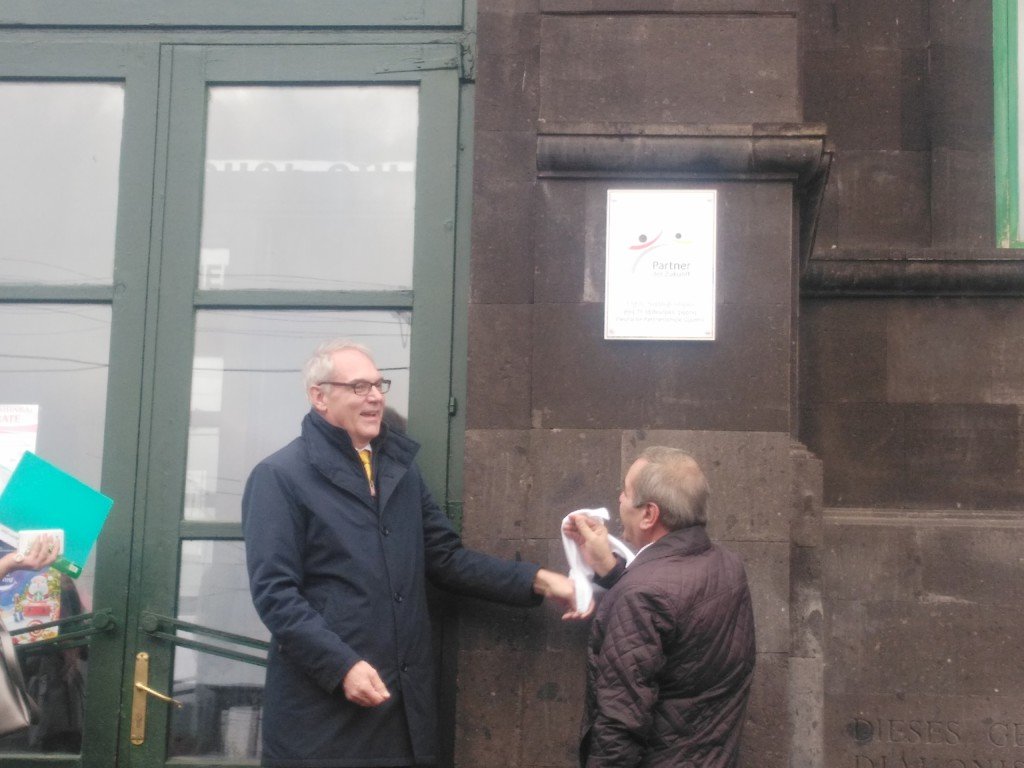 After the Official opening of the new status of the school, all honoured guests where invited for a little celebratorz meal in a restaurant near bz while the rest of us… slaves ( haha ) had out lunch in the cafetaria. Me and karen woddled down there and i was surprised at how simple but how tasty and filling the food was. The school mensa served us a very simple sald with some grain and the mst amazing bean/ lentils hanburgers. I swar the first time i bit into them  i thought it was chicken haha. but well we ate alot of that and funnily, the teachers who stayed back thught that they  woudnt get any school lunch and thus they ordered forn TAshir pizza ( a Mc.donals kinda thing in armenia) and so after we all kinda stuffed out bellys, they walked into with a few boxes of ceasar salad and three big pizzas. Nonetheless, i can say that we didnt even scatch the tashit food haha.

So after that good Lunch, me and Karen turned ourselves to the task ofsettung upall the IT needed for the Childrens University wich would startin about an hour or so. We set up all the neccesarry beamers, laptops and speakers in the 6 rooms in no time and watched how the first day of The childrens university began,  WE basicly only hoboed around until it was done and then we dismantled everything again and put it into a secure room before walking with the whole teacher gang to the hotel we would be staying at. FIrst we got the information that me and Karen would be stazing in the familz room and all the teachers made a little joke of that but we lucilz had two seperate rooms in the familz option so that was nice.  I reallz needed to have some alone time after the wholestress, chaos and social time before, during and after the Seminar in Georgia. Now at the same I was also starting to think about a small incidient which happend during the Seminar. Perro brought in a small kotten which belonged to a friend of her who had lost it . Now that kitten had been on  the streets though for a couple of days. Keep that in mind with Georgia being a high risk countrz for Rabbies. And Rabies had a basiclz 100% mortalily rate in human. And i didnt want to die haha. So i started googleing about the disease and that was a bad decision beacuse i started interpreting things and i basicly fell into a small paranioa. I was also struggeling with the decision to go to a doctor in Yerevan or not. But anyways while that was happening in my head , we all packed our stuff again, dropped our luggae of at the reception and checked out before walaking to the shool again and and setting up everything for the CHildrens University.We sat around agin for half of the day untill it was over and transported all of the quipment to the Hotel where we would load it into the Sprinter when we would leave for the Capital. We would drive back in around 4 hours so me and Karen both visited different musuems, he the Deathmask museum and  the museum of natTown architecture and development while the aladies / a.k.a. the rest ) went and did something else. After thatwe both had a small sanck at a mensa typed restaurant and well after chilling for a bit more, loaded all our stuffs onto the bus and headed home.

I arrived at the apratment of the other volunteers after a few hours of drive and getting there and so yet again i was pretty exhausted , so i basically just went grocery shopping with the rest and took it easy the reast of the time. And well after that i just went and snoozed.

The day after was the day where i would have to decide to either go get some medical help or go back to Chambarack, and i decided for medical help. Soo i rang up the doctor who helped be get the OVIR ( a permit to stay longer in the country) and well made a small appointment with her. When i met with her , i noticed that she was actually the director of the Polyclinic so i was like a bit.. ashamed hah? But she took a look at the bite and listened to my story and said that even if it wasnt something serioes, that out of reasons of protocol, id still have to go to the Infections Hospital to get it checked out. So after a Taxi ride and some asking around and walndering through the building, ffounI finally found the doctor who i was looking for and waited my turn. She was a older Soviet doctor, while very strict she also cracked a few times and showed some interest and sympathy in what im doing here and etc.. And so after some telephone calls with superiors and probably the Hospital in Chamabarck tol be that i would just have to do some extra measures and go and get the rabies Re- and Post preventuin shots thre, since thats where i Live. Pretty cool woman haha.

I didnt really think about it but the Hospital also has „Closing times“ so when i arrived there, every window was dark and i missed the closing time and i was like “ You gotta be kidding me “ since the case of rabies is a very time sensitive one and ive already almost waited a week. But i remembered that there was the ER entrace so i tried that and sure enough it was open and i approached two nurses and told them my story. The called down the doctor who was the on the night shift and he got all the medication and gave me the shot. I was very surprised when they got out the medication and i recognized it being also the only anti-rabies vaccine allowed in Germany, so i was very impressed haha, i expected them to have some soviet mysterious chemicals which lets me grow a third eye or something haha. I was also told that i would have to have follow up shots on the 6th,10th,18th DEcember and on the last one on the 3rd January.

Then I returned home , had a lovely reunion with my peeps and had a lovely Dinner before drifitng into a deep relaxing sleep.