This Essay-isch recollection and documentation of the developments and Results of the Project „Blender“ will be written during the entirety of the Project, meaning that instead of posting small updates regularly, I have decided that i will edit this Post and save it as -private- until completion where it will be classed as -public-. Thank you for understanding

In Light of the the upcoming project with the Ayb school, i have taken upon myself to learn the computer and modelling program which will  be used: Blender (www.blender.org)

Now i actually installed this program before i even came to Armenia because i wanted to learn how to animate  and model thing as a personal skill since it is kind of cool and probably would come in handy in some profession. Now to how i planned learning the program is by trying to model the No.1 School in Chambarack where i work as best as i can in the categories of static, terrain and texture.

Now first came the static of the building. How the program is set up very simply despite the very confusing and complex Interface but the very basic nature of the process is to create objects, Planes and other 3D shapes and manipulate them to your wish. Now so first i created a elongated rectangle for the bigger school building before adding the rest of the objects. Now how to manipulate the sides of objects is my right clicking the object , pressing shift to enter the „edit“ mode and then choosing the “ face“ option on the lower bar and then moving that side according the different axis to your wish to reach your wanted shape.  Here was the first result :

Now ill just skip alot of the actual actuall process of learning alot of this. SO please forgive me haha :). Now we are tasked with making the terrain.

Since the School is build on the hillside of a bumpy mountain,there where many uneven regions and structures also had to be put in place during the static so the whole school would remain somewhat on a similar plane. So how to make a terrain/ landscape in Blender isby creating a new Plane, and increasing the dimensins of that object tothe size of the creation grid( which i belive is something like (8,8,8)) so that it covers the whole field. Then you ,again, reselect the enlarged plane with the right mouse button and then press tab to enter the „edit mode“.Then you go to the tab on the left side and choose the „subdivide “ option in the tools bar and do that a couple of time untill your original plane is cut up in many many little planes. After that you would press „c“ to make a little reticule instead of your cursor and with that you could seolect areas of the small planes and then, again, you would use the“extrude“ or „intrude“ option on the left baar to either sink, or lift the planes. And doing that, one can create a “ landscape “ of somesort. When one is done, you could press the “ smooth“ textures options and it would smoothen out pixels and edges  to make a more fluid terrain. Here my first test with it  : 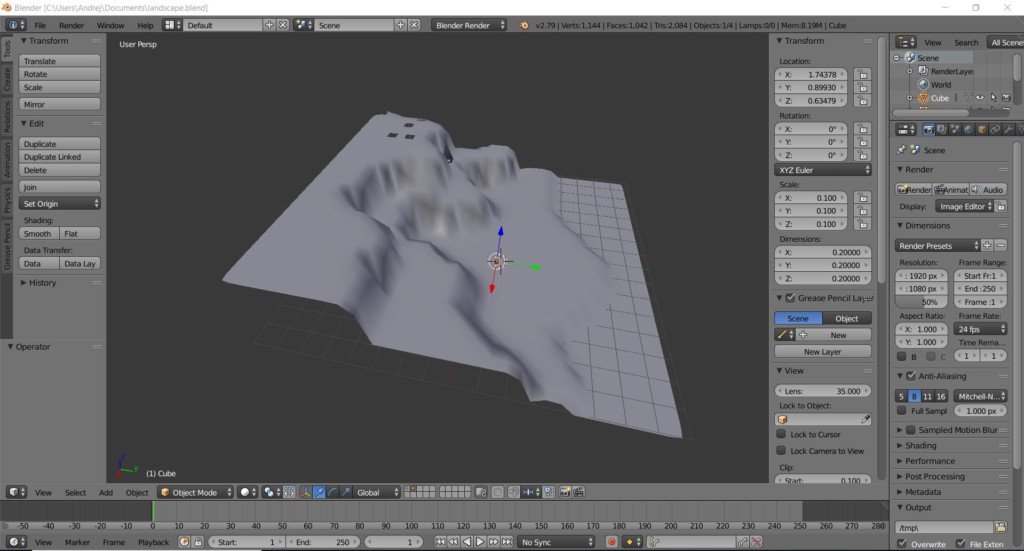