(Im definetly not writing this a week late)

Now haha, where did we stop?Oh right, a lovely weekend of my friends in Chambarack and a good end of the week with the Kids in my yard, playing around outside! Well after the weekend , there was of course the normal week again.

So Monday started with a nice Omen, to my bookclub with the 5th Grade, only one kid showed up to the lesson, even though i went to their class and told them before. There was some counter propaganda being done in the class, i  found out after some research, but im pretty sure ill be scary enough to force them into the Bookclub next week 😉 But heres a quite cute and amusing picture :

Following the next day, i went and go tell the 6th Grade about the book club thats going to happen after their usual lessons. Funnily i encountered some of the children from the 5th grade in the class room so i got pretty confused if i told the 6th or 5th Grade twice and thus, like forgot about a grade. Not going to lie, I still dont know which and who is who haha, Ill do my best to  to separete the two and manage to organize mz programm accordingly haha. Well around Tuesday ot Wednesday I got reminded about something oretty important and work heavy which i just forgot. The Goethe Centre allowed two GErman students to travel to germany each year aswell as Fuunding a Tri-national Summertraining camp in Georgia with Armenians, Georgians and Aseris (Aserbajanian). And well, i was supposed to take care of the Applications for both Groups and well theres 24 Applicants together. Each applicab has to fill put a two page form where they also have to wwrite their Motivation as well as optional Interview. And well , my hard work was to make them write it, give me the inforation as well hand over their languaag proficiency certificates for cscanning. It sounds pretty easy, but its really alot of stress and work. Alot of running around and trying to get information out of people. But looking at how things are now, Il´m pretty sure that ill be done in the next two days. Which is still before the deadline so im good.  I Just hope that i dont piss off or annoy my boss beacsue she is the one evaluating the applications haha.

Otherwise  I also baked myself a Pizza with some help of Emma ( for the dough) because its a pretty good eat-when-you-want meal ( I made two of the ones in the pictures´and they  lasted around 2 days), heres a picture ^^.:

Then throughout the week we had much more food and drinks in the living room then usual. Unlike ( i think) teachers rooms in Germany, the teachers room in Armenia literally sometimes feel like a family, like everybody is nice and sweet, they dish out food and drinks and we all like gather and eat together, quite sweet actually. The first time they even cut up Potatoes and baked/fried them on the metal oven featured here before. They where quite tasty. The teachers even brought home made Wine which was pretty good actaully. The smell and taste kind of remindedn me of the Grape (flavour) present in Japan. The second little feast was on Friday, Friday was the day schools celebrated the „Day of the Army“ In armenia. The directo himsle brought out some vodka and ordered some Kebab to celebfate the fact that his son came back from the military , since in Armenia, when your sons go of to the military, you dont kknow if theyll come back. There was a small performance after the lessons from the 9th grade dressed up all in Unifrom and marching singing and telling stories about the patriotic armenian army. For me, it was a pretty absurd but interesting thing to expeirece, but yet again that just shows the difernces of out countries, societys and worlds. Now, after that work day ended, i finished the Friday by hitching a ride with Tigran back to Yerevan where i joined my friends for a pretty cool Weekend. We had agreed to meet up since it would be Elisa birthday on Sunday. We all had a nice dinner and finished the evening with just talking and relaxing for the weekend.

Saturday we did quite a bit,  but its kind of not coming back haha. I remeber that we went Ice-skating, on the most disgusting rink ive have ever been too. I payed 10 bucks for the mosty worn out iceskates aswell as a tiny ass skating aread. But im glad, because i know i wont ever go there again. Oh and before that we went on a Free walking tour with our guide Tigran. He was a bit sketchy but sweet in the end and we had a nice time with him ^^. Well now after that and a lovely lunch and iceskating :

(Definetly not worth it, it was 10bucks for the worst Iceskates, Worst Iceskatingrink and a short period of time, go to the one at the Winter park instead!)

we returned back to our place, but not before going to the super market for some groseries. Since we planned going out that night we bought Some gin and some of that… Pomegranate Vodka ( people who know what it is will know haha) and some things to mix with and headed back home where we put the kinds into the freezer and just chilled again haha .After making some dinner and pregaming quite a bit we where all set to go! At that time it was around 10 and Martin would be meeting us at the first Bar since he had dancing lessons before.

So first we went to the „Anune“ Bar and well, we waited for around 15 minutes outside while waiting for martin, since we are the very best friends. We just played around a bit on the little playground/park infront of the place untill amrtin arrived and then headed in. It was pretty empty and we just sat in a corner, rodered a whiskey and played Cards against Humanity.

Second Stop ( as far as i remember) : bu´Burgerking

So after having plenty to drink, we all sat into a cab and drove for like.. 3 minutes( quite unneccesarry) and got of at the Northern avenue and stumbeled into the Burgerplace. We somehow ordered some burgers and fries and well just devoured them in out  tipsy/drunk stupor. At 12:00 we loudly sang happy birthday to Elisa, since it was her birthday. When we where about to leave, Kira stumbeled and basically fell onto the floor. Just to summarize, we where the drunk, foreigners haha.

After the little fooding, we made our way to the highlight of the evening which was the „Stoyka“ Bar/Club, i really dont know what it is haha.So we go the steps into this little basement made out of 3 well made and equiped rooms and since we already had a good amount of alcohol inside us, we headed straight to the dance floor ( sounds hella cheesy). And well, we basically spent most of our time there. At one point martin wanted to do shots with me but we forgot haha. We left the place id say at around 1 isch after over an hour of dancing. I was sweaty and exhausted. but the night wasnt over there!

So ive heard before that the Embassy club was a underground alternative techno club scene and well even though i wasnt the biggest fan of Techno music, i was still pretty excited to see how it was. we left the stoyka and walked down the street basically to the Childrens Park in the city center and first we thought the place was closed since the park it was in had its gates closed. But after walking around it, we found an entrance and entered a pretty bare two storeyhouse and after paying a 1000 Dram entrance , went down into the basement. There was a pretty stuffed room with neoen red lights, rythmicall and unison alternative Beats and well a croud of trace like people dancing. After dancing for around 20 minutes, we and martin went for the side lines and sat down on a couch and both decided that this thing we where at wasnt for us, and so we we left, and waited outside waiating for Kira, Elisa and Kira. 20 Minutes past, we all gatehred and got into a Cab home

After dropping Kira of at her Place, we drove back to ours and well, just all passed out haha, we whre all tied and exhasuted and personally, it was the first evening out for a while where i really had fun.

I know that you probably really arnt very interested in reading this post but well too bad for you haha. Thank for reading and this is it for thispost! Below are some Analog pictures we took with Lisas Camera, of course we are only really showing the showable pictures haha <3 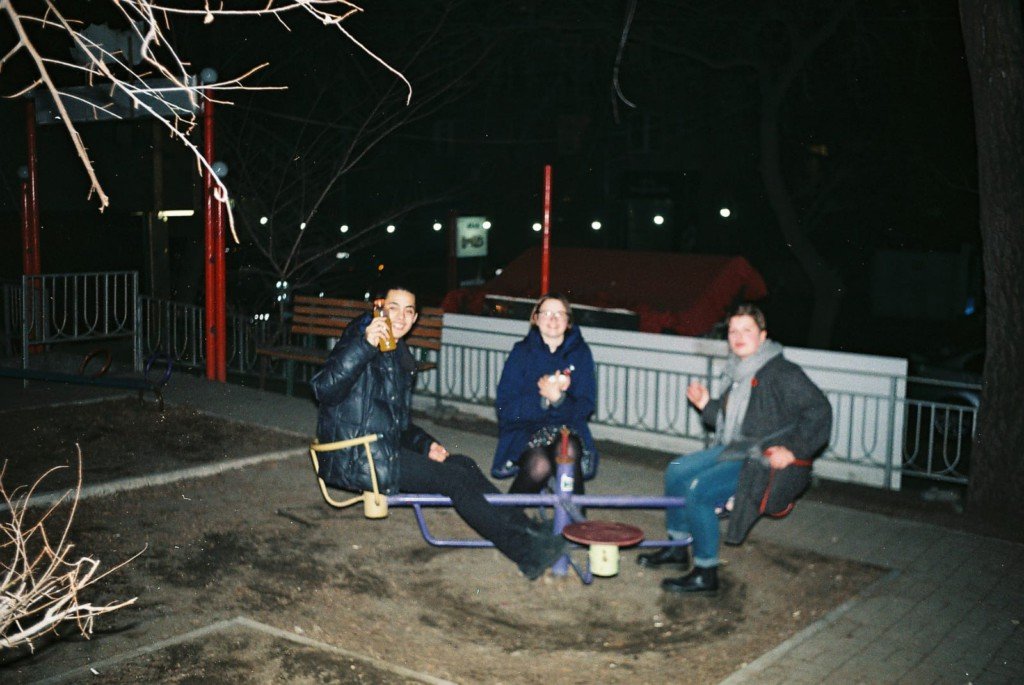 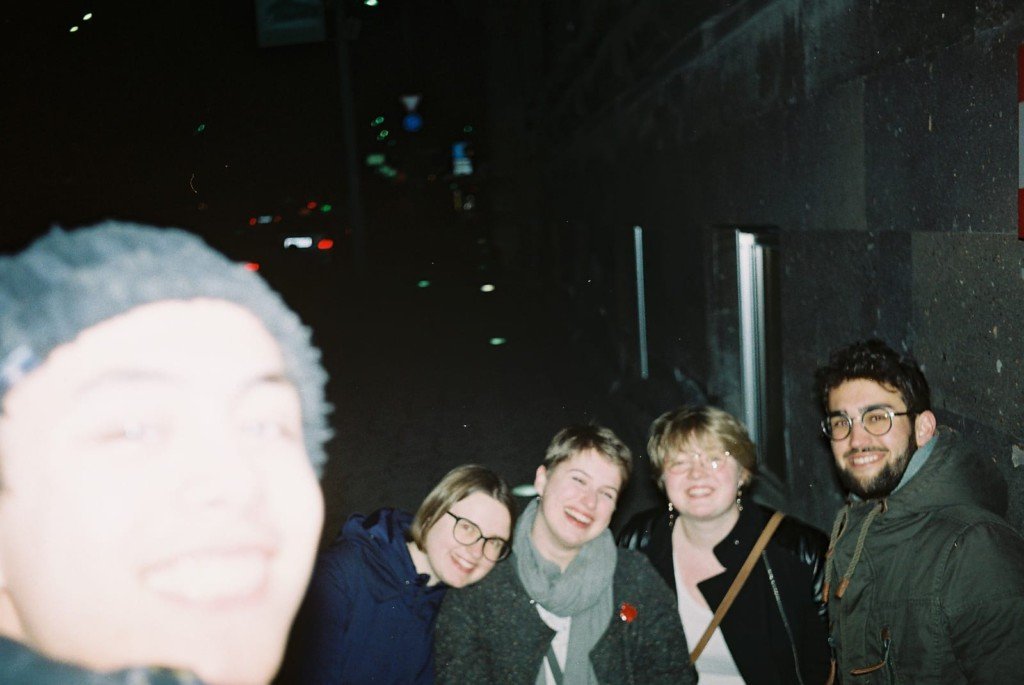 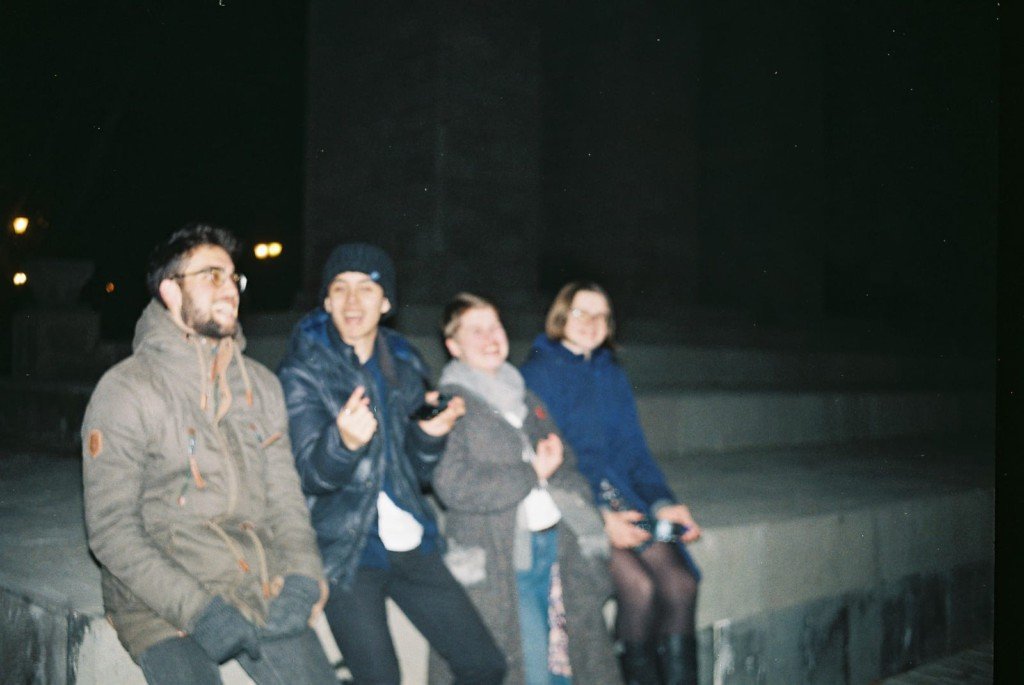 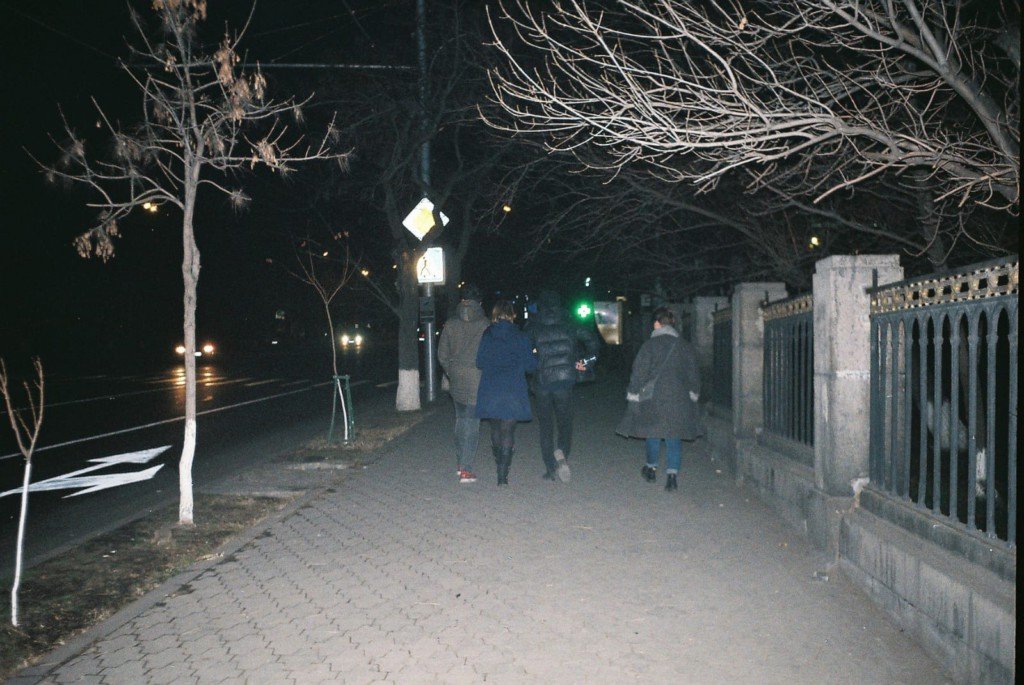