Well after sleeping out the night out on Saturday night, we all just lay round at home for the first half of Sunday morning. I didnt have a hangover but i did feel a bit sicky, so i was also mainly passsive. After forcing down some food and boring our asses of at home , we decided to go and do something. The Plan was to walk through a Park our walking guide Tigran told us a daz earlier and after that, finish some errands and visit the „Blue Mosque“ (the last and only mosque in Yerevan),

So we took the subwaz down to the citz center and walked to the park. The Entrance wasthrough a at least 500 meter long tunnel through a massive hill. Once through it, it was verz intereresting. For some reason it was totallz qieut and warmer, it was pretty amazing to be honest. We walked aalong the side of the hill along the valley, there where abondoned parks and plazgrounds and even a „Childrens Railroad“ which was full with its own little trainstation, tracks and even miniature version but stilll fully funcitonal wagons and locomotives.  WE walkde down along the tracks, as we saw other people doing aswell and even saw a little pool where people where swimming after working out at th outdoor gym which was on the valleys other hill side. We walked for around 30 to 45 minutes untill the valley slowly opened up and we turned a little towards the city again. We emirged into the city again at the Bridge where the Noy and Ararat Cognac factories where located and made our way to the Blue Mosque. Here are some pictures: 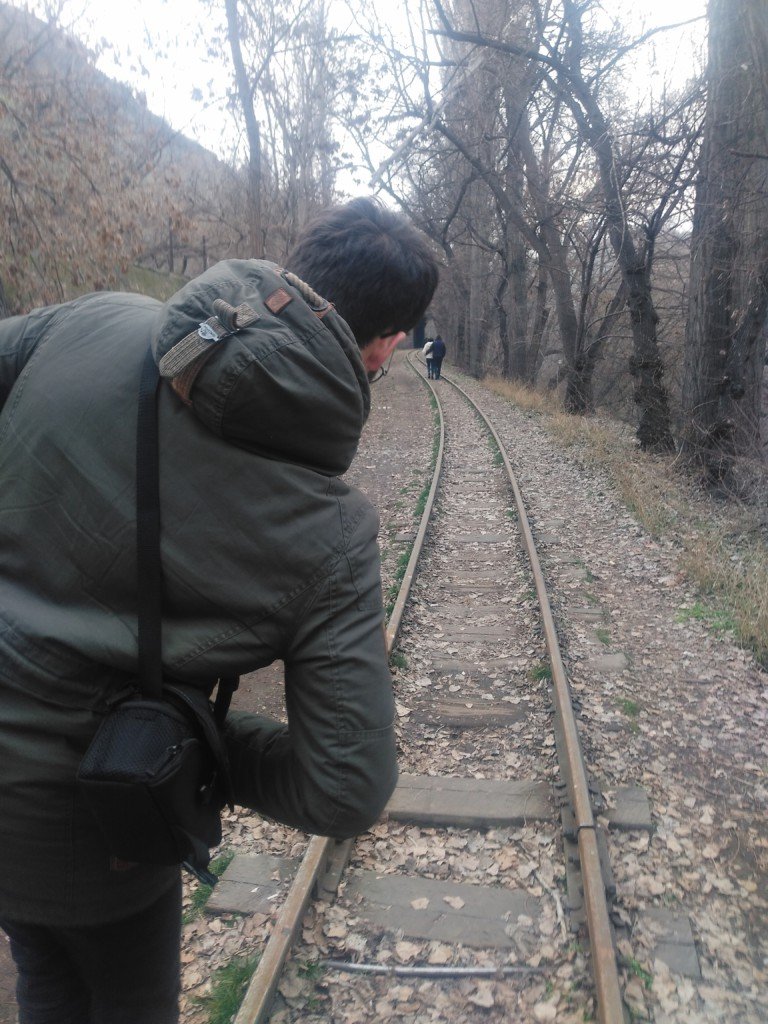 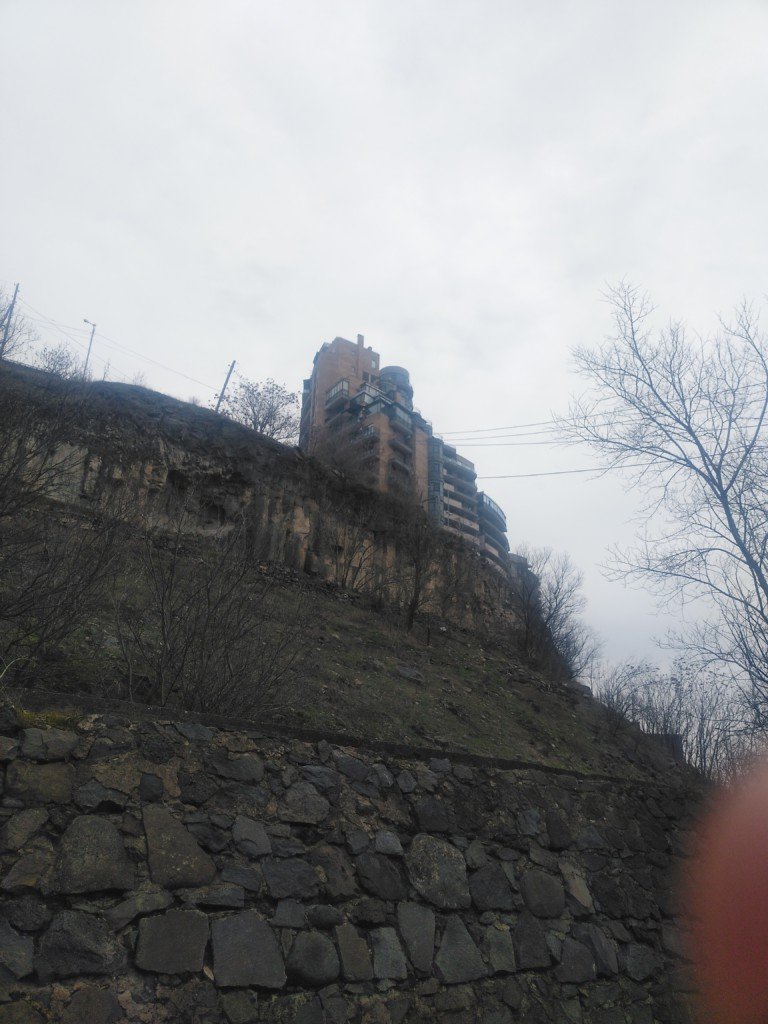 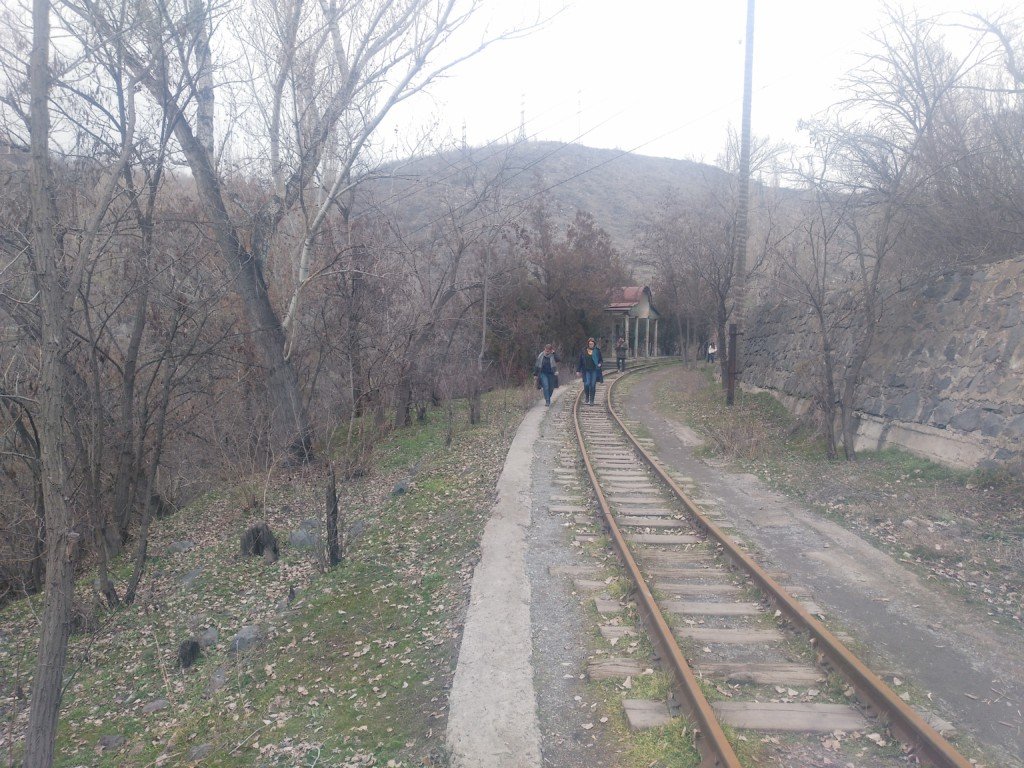 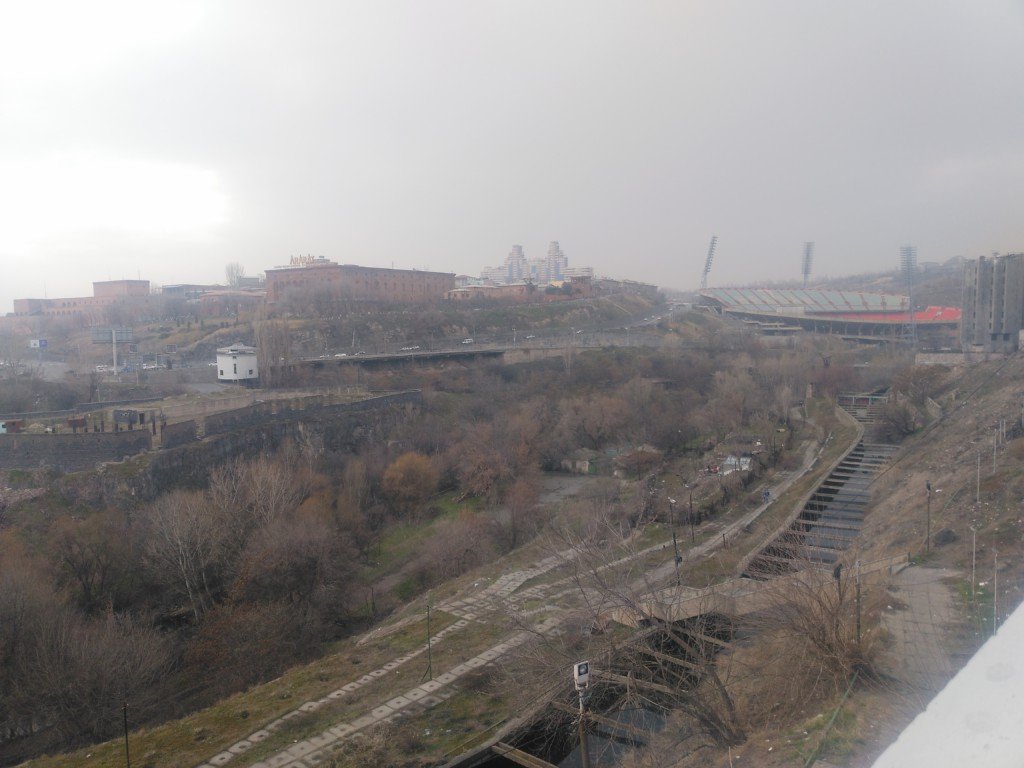 So we walked out of  the Valley, back into the city and after walking down a few streets and turning some corners we already where at the Blue Mosque. We just walked in since it wwas open to the public and really enjozed the intriate and beatiful, middle eastern and muslim architecture, deisgns and tile sets. We sat down onto  a bench and rested, since we all where still extremely tired and unmotivated and just enjoyed the calm atmosphere before leaving.Heres a picture from inside, definetlz a must see! 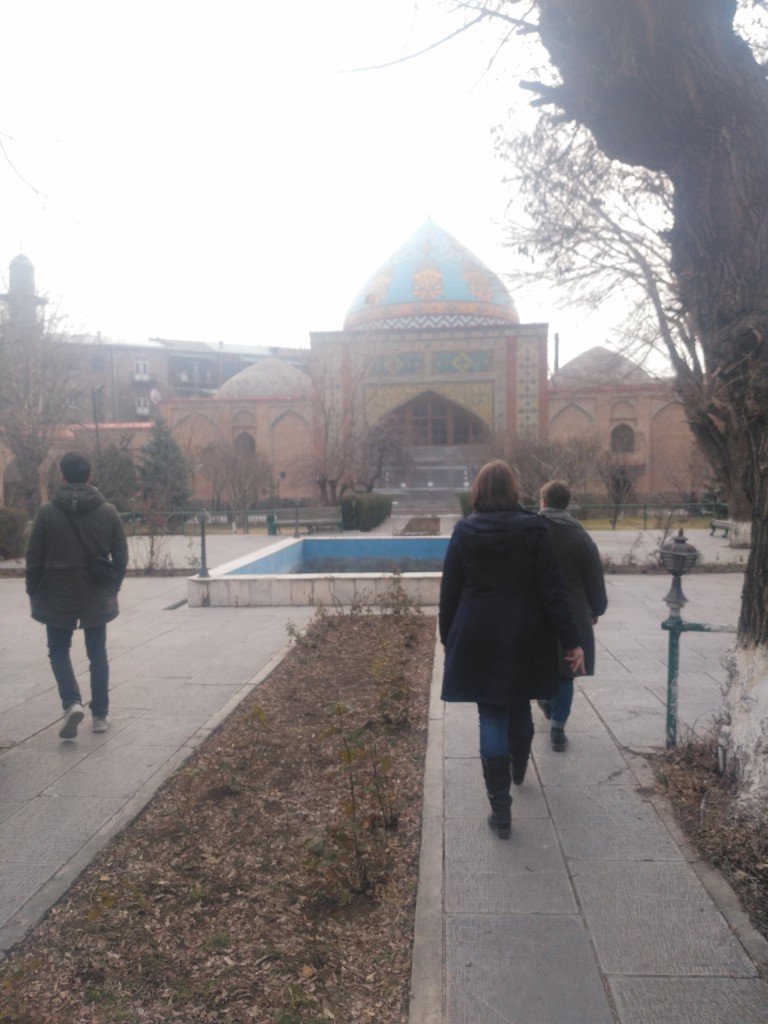 So after we left the Mosque, we walked to the next train station, which was as I remember, oh no, actuallz we walked straight down past the Goethe centrum to the Russia Mall where we would do some grocery shopping and check some stores for a little plastic file shelf I was and still am looking for . So we did the shopping for the dinner, and i sadlz came out empty handed with the Item  i was lookingffor so we just hopped onto the subwaz  and rode it all the waz down to the  end station and  the place wwhere we live: Barekamutyun or in Russian : Drujba ( which means peace). We dipped home, made ourselves some food and even though we talked about going out again, that though quickly seemed unviable since we just dozed off and finished the day.

The next Monday was lovely, It was free since It was the National holiday of the day of the Army and I started off nicely and ordering myself a large fry, 2 hamburgers, and 9 nuggets from Burgerking at 11 am. It was fucking amazing and ill be tturning it into a weekly rituala haha. Heres a before and after picture of the „breakfast“ i had: 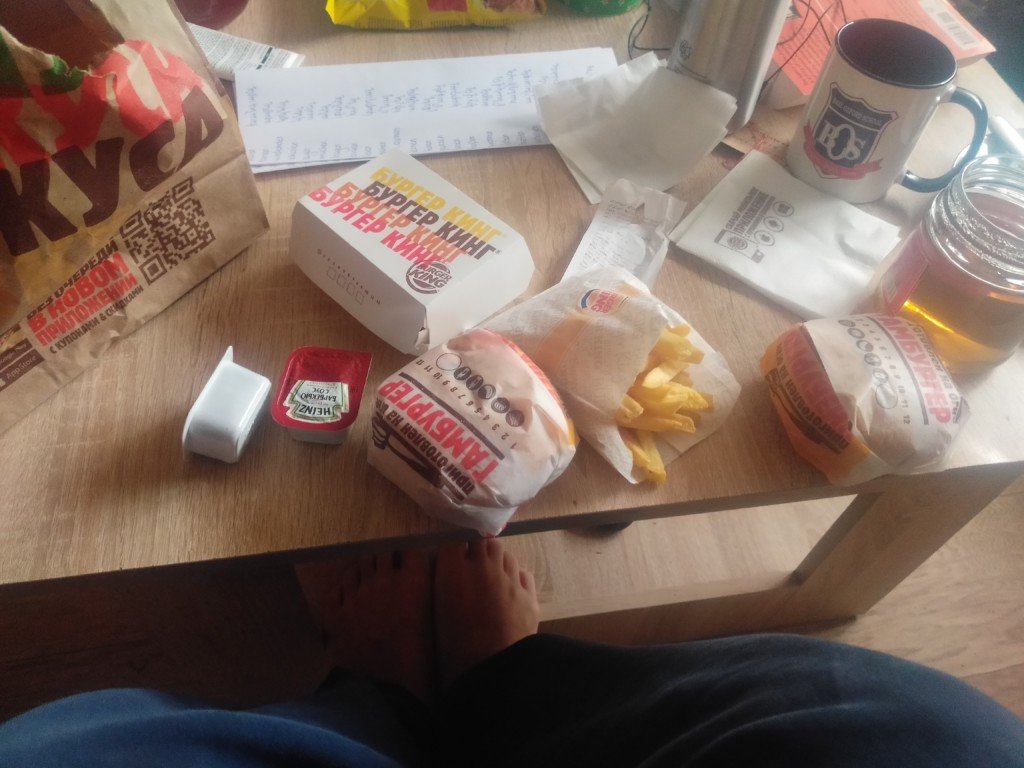 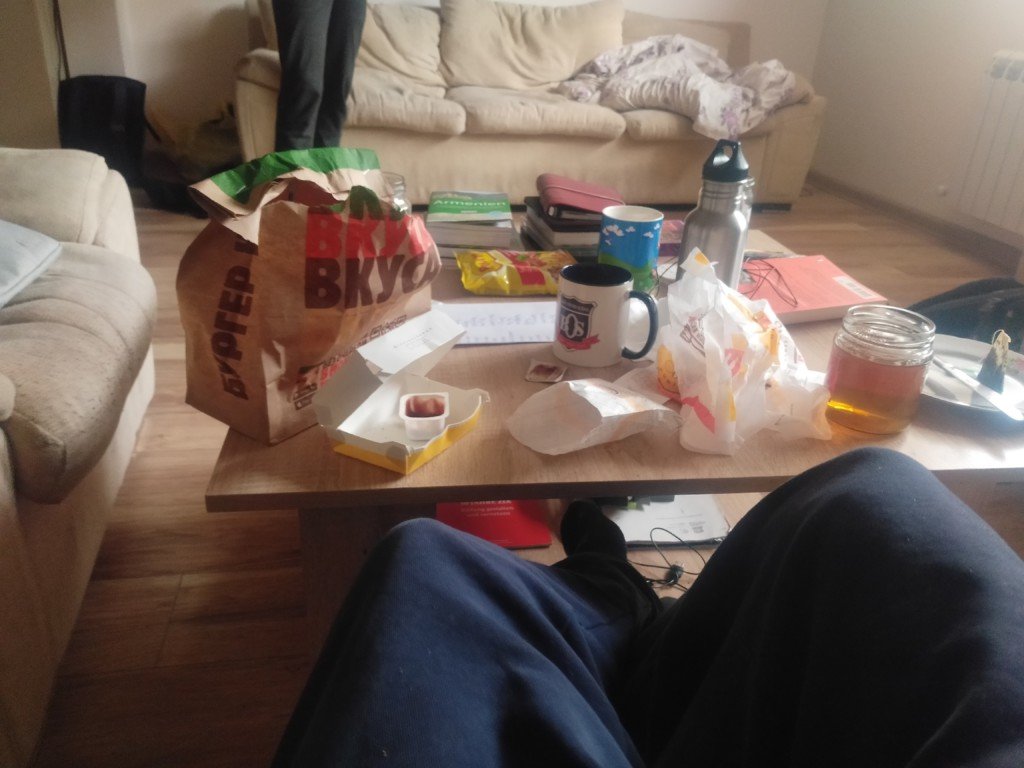 Now after the Food, i dont really remember what happend. Im pretty sure we all just alzed around a bit before getting up. Me packing my stuff and driving to a differnt Ice skating place at the Winterpark, which is on the Tiblissyan on the way to my buststaion. And it was dope as fuck.It  was almost 3 times cheaper and the iceskates where actually decent and the Rink was much bigger and in a much better quality. I could actually drive properly with jumps, flips, backwards and tricks and all. It was dope but I had to dip at around 3:20 because i had to catch a bus to the Busstation to get the Last bus to chambarack which i did manage.

Well i arrived and not alot of extraordinary things happend throughout the week. Notable things would be me finally strating my armenian with Elina. She gave me  book on the alphabets, like a kids book and its bee going alright. Its difficult becuase i was learning the prinmted writing off by heart at home and i show up to the first lesson at school and bum, she confuses me by telling me that ill also be learning the written kind ( the printed and written are very differnt ) so that currently a struggle, im 11 letters in, almost one third of the ways, yaay!

Anoush jan also commented something funny as she walked in after my lesson and said that I wsa having an armenian reading club in here (Funny because im doing a german one). Additionaly I  got to know emmas old and now retruned student. Baghrat the chief doctor for the Military basis here. He speaks pretty well german and wishes to move tehre to specialize himself in vascular surgery and maybe start workingf and living there. Thats about it haha