After a semester abroad in the UK surrounded by fellow exchange students, Elouan moved into a student hostel in Ghana.

The time of good-byes and farewells has begun. So I took the Trotro on Sunday to GIMPA (Ghana Institute of Management and Public Administration) to say goodbye to Elouan, who left France to study in Ghana for one semester. When I arrived at the gate, everything was quiet. Compared to Osu where you constantly hear cars honking and people screaming, at GIMPA it was only birds and leaves.
I was supposed to meet Elouan on campus but we had not decided on any specific location. When I looked past the gates, I could only see an deserted asphalt street climbing a hill, no building or person around. The security person just gave me a nod, then I climbed the hill on a little footpath, shadowed by trees and occasionally by giant ant hills. On my way to the student hostels I passed the soccer pitch.
The student hostels were mostly three-story buildings with a little balcony for each room. On some of them towels were hanging from the brest, from one of them a small child was peeping down. But most of them were empty. We sat down on a slightly crooked white settee that no one had wiped down for a long time. Elouan had already packed, having just returned from a trip to the North. 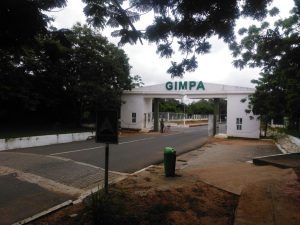 The gate of GIMPA Campus

Why did you decide to study abroad in Ghana?

I wanted to discover another continent, another culture, another way of life. I think Africa was the best continent to go because of the language and the Covid situation. I have chosen Ghana specifically because people told me it was the safest and most welcoming country. The university has a partnership with my home university.

I came on the sixth of March, the day of Independece in Ghana. I came in the evening, straight to my house. I was really in the mood of discovering, was seeing how to get a phone, how to get a network. At the very beginning at least, I really didn’t have any troubles and was enjoying myself.

How did the school in Ghana support you?

There was someone responsible of me, Patricia. Since I was the only exchange student, she was very nice to me, she had plenty of time. She showed me everything in the university, she helped me subscribe to my lectures. She also gave me a lot of advice about Ghana. Aside from this, not a lot. Since I am the only exchange student, there weren’t many events for internationals. Even when I was sick, Patricia was there.

How does the university compare to Ghana?

It is very, very different. At the beginning, it was difficult to see, where and when the lectures were. It is not like in France when you have almost everything online, here most of the information is on Group Whatsapp. Also, in this university, there was less student life, because students are older and working. Most of them are 26 or 27. The way of teaching was very different, less slides, more teaching. Sometimes, there is no fixed plan and the teacher just talks about what he likes. Overall, it was a good quality of lectures. The most interesting subject was Public Finance, in this one I learned about public administration and economics in Ghana. However, I would have liked to know more about the political situation.

What was your relationship to your fellow students?

They were very curious especially at the beginning. Most of them were very friendly and welcoming. Almost everyone came to me and said if you need any help, here is my number. Some of them even came to fix my phone problems with me. Most of them have already known each other for two years. Sometimes, it was strange to arrive and be the little new one. Sometimes I feel like some, not everyone, see me like the stranger, like a curiosity, not a friend.

Was the language an issue?

Very difficult. Between them they often speak Twi, or switch between English and local languages. Even their English can be difficult to understand. The Twi was just impossible for me to learn in four months. I just have to adapt to it, I Cannot ask them to stop speaking Twi. Some tried to switch to English when I was around. I just had to adapt.

What was your key-takeaway from your time in Ghana?

I learned to relax more, everything is more relative. Everything here felt also more intense to me. Adaptation, relaxation and intensity.

My tips for future exchange students: Don’t put too much pressure on yourself. There is a big gap between what you are dreaming and what you are doing. Sometimes you follow a trap, it comes easy to say: I am dumb I should have done better. At the beginning, adapting can be hard. Be open to this kind of mistake otherwise you will always be overcautious. Don’t judge too quickly. That is also one of my take aways: To be open and judge less.

Overall, I don’t want to miss the experiences I have gained in Ghana. 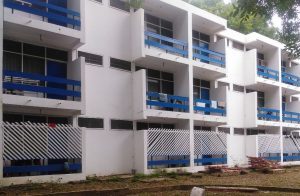 The student hostels on GIMPA Campus

His phone started ringing. It was Jeff, one of the friends he made at Gimpa. A slim guy, currently on break. They had gone to the beach together some time and visited monuments in Accra. Just some moments later, Liza also joined, a bag with fufu and groundnut stew in her hand. She wanted fufu to be Elouans last dish in Ghana. To eat, we rinsed our hands with bottle water and then dug our fingers into the soft fufu, following a technique Liza showed us. Most important: Never use your left hand, it might seem rude. Since Liza is going to study abroad in Germany this fall, we talked about punctuality and other cultural differences.

Then Elouan left for the airport and the campus turned quiet again.