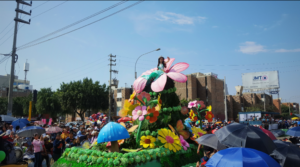 Baile, baile! The public is shouting while dancers in traditional colthes walk by, school’s orchestras play well-known melodies and of course the elected queens of Latin America greet Trujillo. The „corso de la primavera“, the annual spring parade, is one of the most important and most popular events in Trujillo. For one day, the streets are all blocked in order to celebrate the beginning of the spring season with its warmth, bright colours, flowers and buzzy atmosphere. Although people have told me the last years were better, I enjoyed the parade a lot. Amazing costumes and stunning acrobats made me totally forget the strong sun that mercilessly burned my skin. In the evening, after spending some time at a local fun park with some students from the national university, my face hurt but it was definitely worth it!

Some days later, I finally came to visit the two famous markets Mayorista and Hermelinda in the city centre of Trujillo. While the Hermelinda is constructed like a classical market hall, the Mayorista is rather a whole quarter where you can buy anything, no matter if you need it or not. The streets are always crowded and from clothes to toiletries or food, the sellers are doing a great job convincing potential costumers. For me, the most important part was the fruits and vegetables area where you find the best and also cheapest ingredients for your cooking at home. Mangos for 30ct each and sweet as sugar, avocados twice the size of the ones in Europe and much more. They might not look as perfect as in the supermarkets, but the taste is so much better!

Talking about food, I really need to recommend the supposedly Chinese Chifa restaurants here, that serve you immense portions that consist of a mix of Peruvian and Asian food which is less bizarre than it sounds. You’ll find them at almost every corner so if you’re not too sure where to eat, Chifa is always a good option!

The last week has been surprisingly busy so I’ll split my experiences into two blog posts so stay tuned for the next part where I’ll elaborate more on salsa classes, a trivia night and of course Chan Chan, an archaeological site on the history of the Chimú culture!