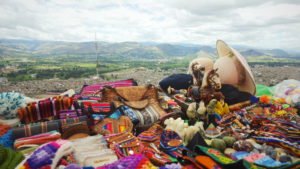 Edamer, Tilsiter, Cheddar, Parmesan, Gouda – sounds like heaven, doesn’t it? A cheese heaven, located only 6h from my hometown Trujillo and called Cajamarca, famous for its diversity of dairy products. You won’t believe me how much I’ve missed milk, yogurt, butter and cheese for the past few months; it’s rare here on the coast and therefore expensive as hell. But let’s start at the beginning. 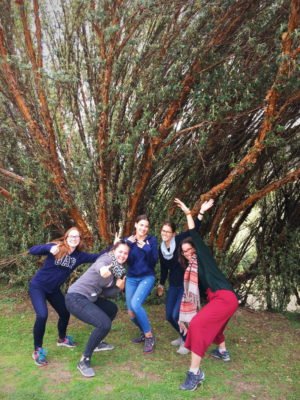 After New Year’s, I got to spend another four days in Cajamarca, the next „must-see“ Andean city in the northern part of Peru. I travelled there with my 4 flatmates and can honestly say that this is the most beautiful place here in Peru I’ve seen so far. It’s a calm city with few people walking the tiny little one-way streets in the middle of an impressive valley, surrounded by green mountains. 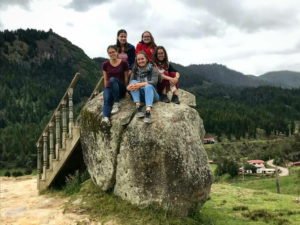 We decided to take different tours, exploring the nature around it and although it objectively was lots of driving around, we never felt stressed or uncomfortable because of that. The landscape is green, hilly and free of traffic. 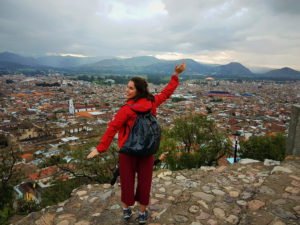 The first day we went up Cumbe Mayo to 3500m to appreciate the natural parc with its plants, aqueducts and stone forest (I’m serious) where we observed different formations that might even symbolise something. 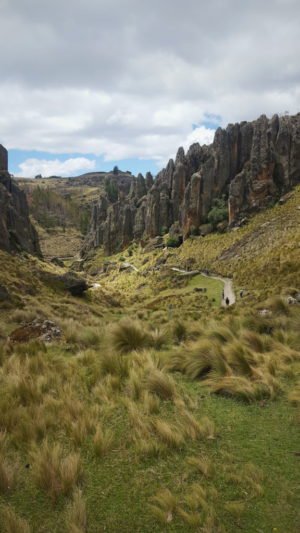 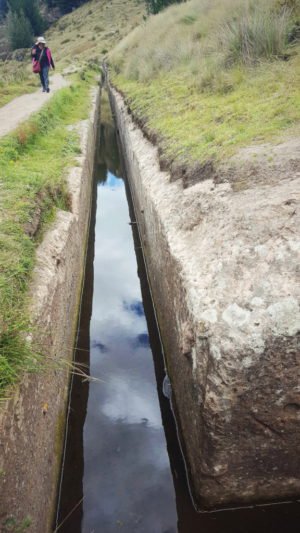 Give your phantasy a go and tell me you can see the rabbit and the Pope in the following picture. You definitely do. 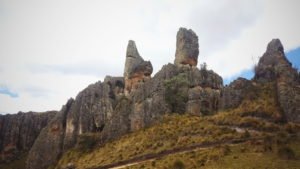 Later we went to Collpa, visiting a lagoon that looked as if it was taken out of a Disney movie and after that got to witness the famous „llamado de vacas“. 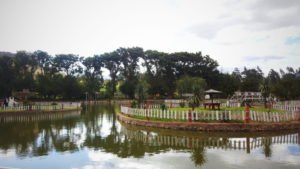 In this event, the cows of the farm are called back in by their names and go the way to their personal box in the stalls, all by themselves. It actually worked out and we were all pretty impressed by that although it is probably only the result of classical conditioning. 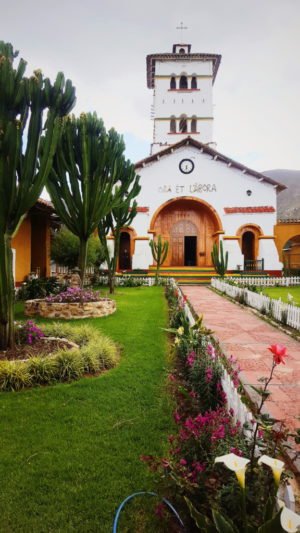 Collpa definitely has a very special atmosphere due to its colourful houses and decorations and trying some of the freshly prepared manjar blanco made the day just perfect. 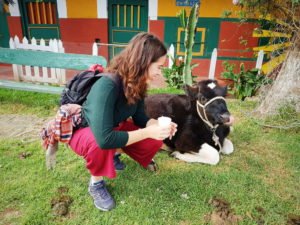 To end it, we relaxed for one hour in the thermal baths of Baño de los Incas where I could have stayed forever. 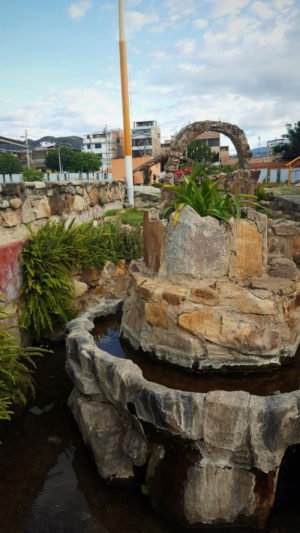 The next day was nearly as perfect as we spent most of the morning in a little zoo in Granja Porcón. It wasn’t so much the animals but, again, rather the nature around it that made it so special. 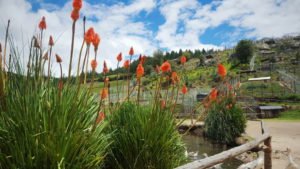 It all seemed so peaceful, the people working on the surrounding fields or weaving clothes the old-fashioned way and a stunning red flower (still haven’t figured out its name) made this place really magical. 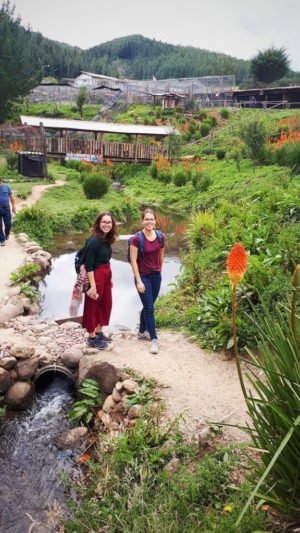 After a typical lunch (trouch, obviously) we proceeded to Otuzco, a village famous for its so-called ventanillas, small holes in a huge stone wall upon a hill. We were told human bodies were buried there a long time ago but only of important people in the village and after the process of decay. 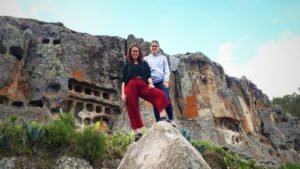 We also got to see a nice hanging bridge and another milk factory, including some more product tasting and, of course, buying. The highlight definitely was the garden of hortensias, an extraordinarily aesthetic place. 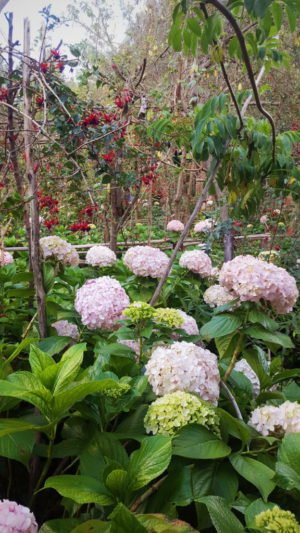 It’s filled with flowers in colors varying from all possible shades of pink and rosé to purple and blue and we felt like we were stuck in a fairytale. If it hadn’t gotten dark, we’d never have left.
Our last day consisted mostly of visiting a lagoon near Namora that we also crossed by boat. It was the only place with mosquitos so far and, as we didn’t expect it, we got bitten a lot. 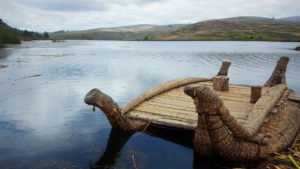 But more importantly, we visited another stone formation on our way there where we had a lot of fun climbing the rocks, taking photos and just enjoying the stunning view. 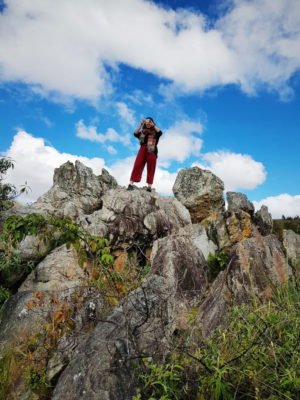 Too soon we had to leave again and got a little city tour to end our stay. It was interesting to hear the story of how the inca empire, ruled by Atahualpa, was conquered right on the plaza de armas and the starting rain just perfectly added a dramatic touch to the guide’s tellings. We also finally climbed up Santa Apolonia to visit the sacred place and to have a more than breathtaking view over the whole city. 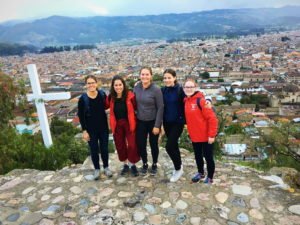 After some more photos, dinner and a hot chocolate, it was time to get into the bus back to Trujillo and say goodbye. Goodbye to Cajamarca, the Peruvian city I really lost my heart to. 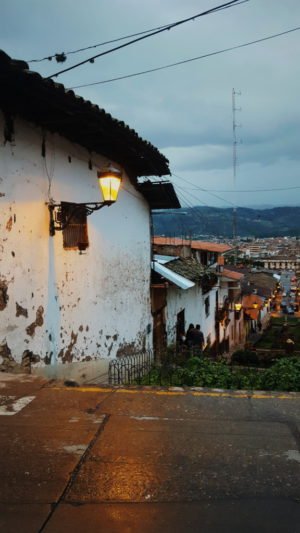 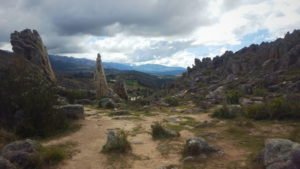