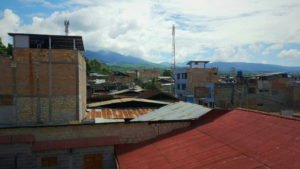 Aguaje, lucuma, cocona! Ice cream, juice or raw: the fruits of the selva show a variety of tastes, unknown to me and I can say that apart from their health benefits I really love them. Here, they form such a natural part of the daily diet that I’m really jealous of it! But fruits weren’t the only thing I experienced during my trip to Tarapoto and therefore this introduction is followed by a report separated by days to better structure the plentiness of activities we experienced!

After the supposedly comfortable but rather exhausting 19h bus drive to Tarapoto (you can’t sleep while the bus is constantly braking and accelerating due to serpentines that lead you uphill for hours), we finally arrived in our hostel and were surprised by the hardly bearable heat already at 10am. As we still had some free time, we walked around a bit and explored the city centre but soon returned to our air conditioned room. I decided to take another walk to the famous chocolate factory that reminded me of the hikes in the Israeli desert. But now I proudly possess lots of jungle-chocolate! On my way back, I took a mototaxi which basically looks like a motorised Riksha and is the main mean of transport here. The streets here aren’t made for bigger vehicles so you rather stick to these mototaxis and normal motorcycles.

In the afternoon, our first tour started close to Tarapoto and consisted of canoeing on the Mayo river. About 8 people on a small boat trying not to fall over seemed impossible, considering some wilder parts of the river. But apart from getting all wet, we made our way without any accidents and even swam (rather relaxed while the stream pulled us further) and jumped into the water with ropes. The other participants were pretty cool too and after getting over our fears, we all really enjoyed the activity!

Yes, getting up at 3am definitely is fun! Hearing about the following 3h bus ride made us hope to catch up on some sleep but the streets and the driver’s style made this completely impossible. Anyhow, we had a very packed day ahead and started with a boat tour on the Negro River where we observed the (secondary) jungle with all its flora and fauna. Our guides urged us to stay silent in order not to miss the shy animals and luckily we spotted various monkeys, birds, of course lots of insects and even a snake and a sloth sleeping in a tree. But also the plants, rich in water, are very different from what we know and some trees reach horizontal sizes of several hundred metres. There was always something to look at or to listen to which made us really feel the nature. 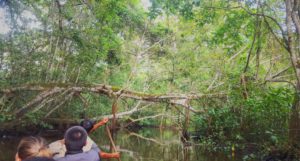 In the small village next to the river, we were served traditional breakfast consisting of cooked banana and some specialities made of corn that were super tasty.
After that, we visited the caves of Palestina that were formed by the Jordan river. I’m not kidding about the names and I really felt  some melancholy thinking of Israel. But the caves easily took my whole attention because of their beautiful formations. Our guides explained the different processes to us and we even saw bats flying around and giant spiders crawling on the floor. In one hall, we all turned off our lights and remained silent for a while which was an impressive experience. There’s nothing around you, just occasionally the sound of a drop of water hitting a stone. Leaving the caves through a tiny hole turned out to be pretty difficult but we got rewarded by some bathing in the river next to it. 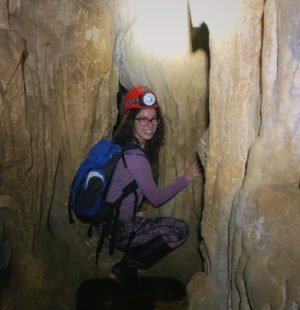 The last official part was visiting the butterfly house and its laboratory where we learned about the life cycle of the butterfly. We would even let the caterpillars crawl on our hands, touch the butterfly pupae and release the butterflies into liberty. As the butterflies were used to human contact, they sometimes even landed on us and we were able to take some nice photos. 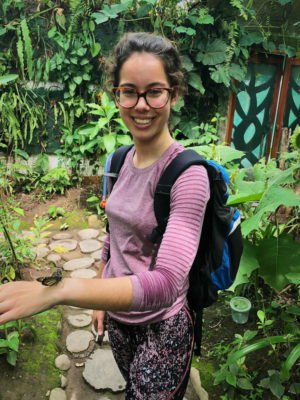 To end the day, we had traditional lunch in Moyobamba, near to Tarapoto. I personally ate cecina (dried meat) and tacacho (a dish of mixed rice and bananas) with chorizo and I loved it!