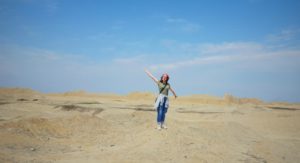 Uno dos tres – cinco seis siete! Básico! After one hour of our salsa teacher shouting this rhythm at us, we finally somehow managed to dance one of the most famous Latin American dances – Salsa! Although we probably will never be able to move our hips as smoothly as the other students, it was really fun learning how to feel the music and finally be part of the great salsa community. I don’t know yet if I will take more classes soon but I’m definitely very tempted to do so!

Which physicist and Nobel price winner helped with the construction of one of the Oktoberfest’s tents? Two hours filled with random questions, also called Trivia night (something I bet Canadians would fall for…) added lots of unnecessary facts to my shortterm memory. Hosted by SKIP, also an international organisation supporting multicultural conversation, various teams competed against each other in order to win cool prizes such as free yoga lessons or smoothies. Sangria and other local drinks relaxed the competitive atmosphere and we all had a really good time! By the way, the answer is Albert Einstein.

One of my highlights so far was definitely visiting the historical site of Chan Chan, consisting of the ruins of the Chimú tribe that lived in the coastal region of Peru (~22km^2) between around 900 and 1500 AD. There are four different places to see among which the ancient palace is the most important part. A guide gave us a tour explaining the architecture of the palace but also the whole culture that was so different from what we know and often is described as a perfect society. There rarely were conflicts or even wars within a community because everything was based on religion and prestige – two very powerful and therefore effective ways to keep a huge amount of people under control. I personally was amazed by the very traditional and hierarchical structures that allowed an entire culture to grow and prosper for centuries. It’s a shame that we only know about very few cultures such as the inca although they only reigned for several decades in Peru. The reason why we only know them is that we falsely assumed their heritage because they were there when the Spanish conquered Latin America. So whenever you are asked about Peruvian indigenous tribes, you now can name the Chimú too and impress your friends!

While writing this, I’m on my way to Tarapoto, a small city in the middle of the selva (jungle). I hope the 19h drive will be worth it and stay tuned for posts about this trip!