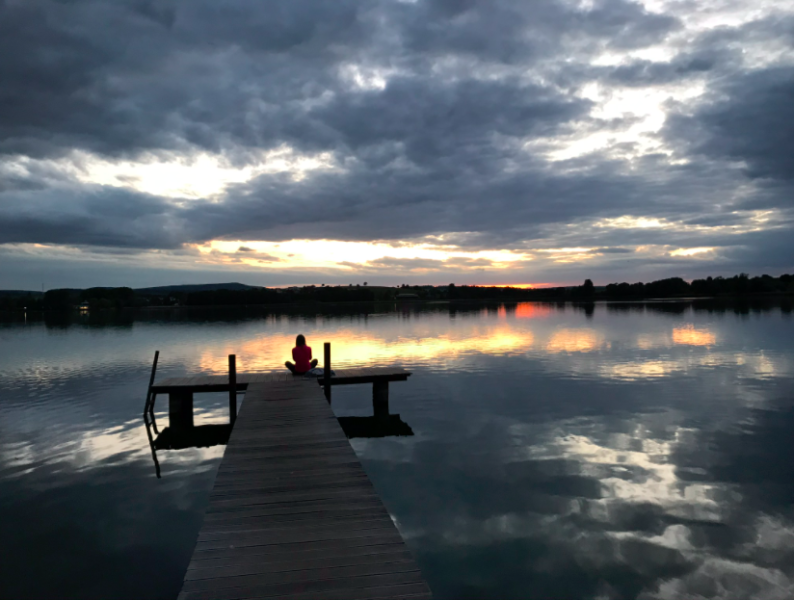 ‘Hmmm.. it is this moment, the perfect moment’, Luisa replies to my question, asking her to describe the favourite part of this adventurous day, as she sits in the sun-set on the wooden nose-piece tired from cycling 30 km packed with camping equipment and too many clothes. Feeling slightly high, we describe each other the taste of the dark chocolate with our eyes closed. 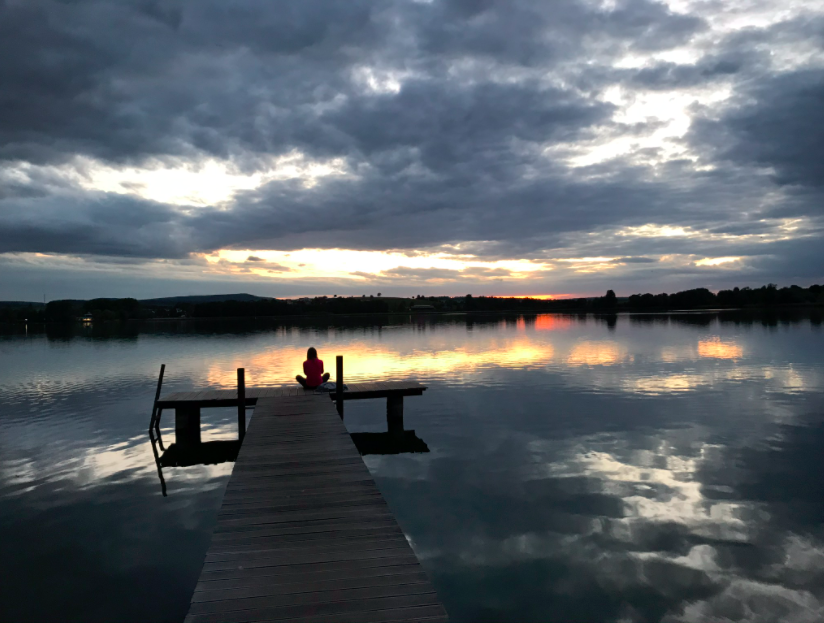 finally found: The perfect camping spot before the sun touches the earth.

Just before we finally found the perfect spot to put our tent, always further and further away from the streets and then another 50 meters into the wild, following the path next to the lake, we had a sundowner beer at a local bar and ‘animal petting zoo’. Okay, maybe two well-deserved sundowners after the tiring tour without a destination, which explained why I took a selfie with a goat. 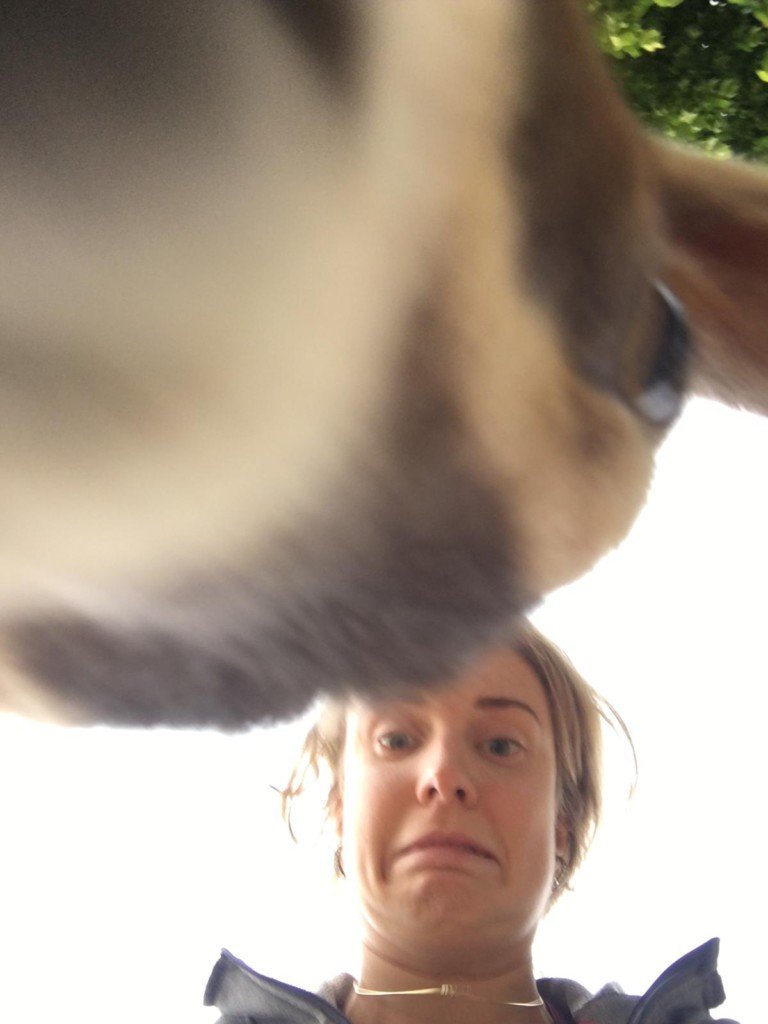 a Selfie with a goat (not the only one) 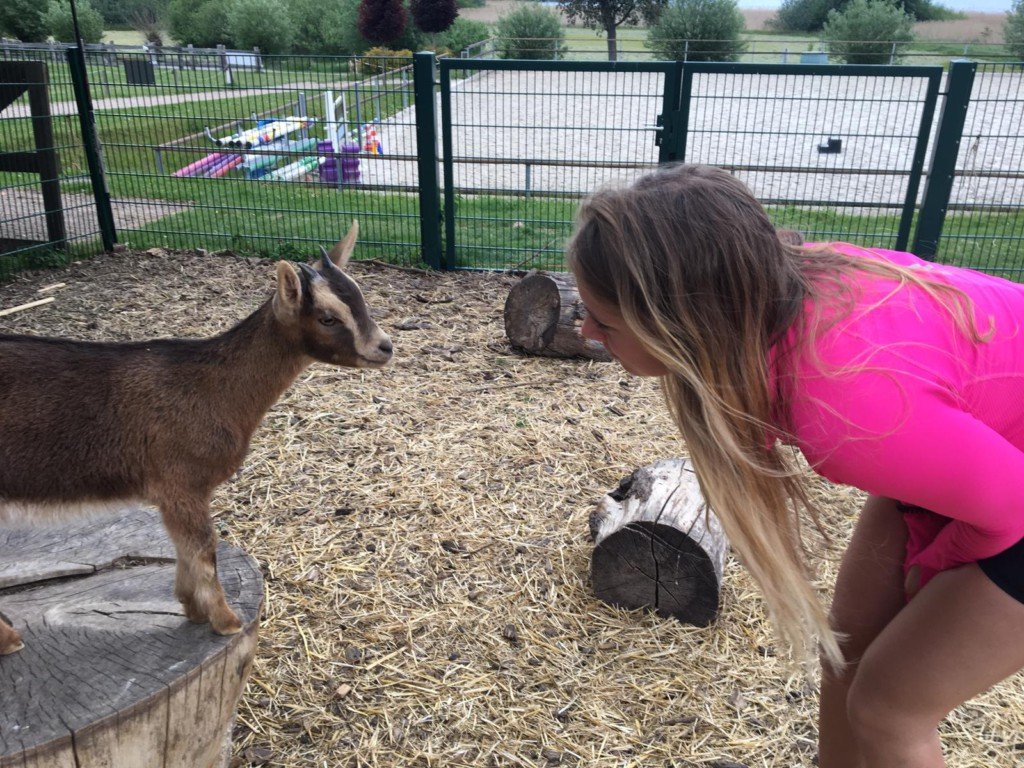 A quick unzipping of our tent the next morning reveals the quiet lake covered with dust. ‘Let’s jump in’, I say and only need to pee quickly. All of a sudden, I lift up my pants again when I see a guy approaching in the bushes. He carries an axe and some weird equipment. Dang! That’s the moment in the horror movies when I say to myself ‘don’t be stupid blond girl – don’t talk to the man with the knife in the forest!

‘Good morning’, I say with my nice voice hoping that he is not calling the police to report illegal camping activities nor killing me with the axe. With a strong Polish accent he is mumbling something about fishing in respose and moves towards the wooden nose-piece. I 30 minutes later Luisa’s in my bikini are drying in the rising morning sun after our refreshing swim and we sit next to Dominic sharing some freshly brewed coffee made with my very first own gas stove and we talk about Polish politics waiting for the fish to take a bite. Often, what happens to the money in the government is ‘ZAPZERAPP’, he explains making a waving grabbing hand movement as if you were taking something away and putting it into your own pockets – ah corruption! And this is why Dominic and Gregorz, a second Polish fishermen who joined us later with an even bigger axe work in Germany… and fish. Dominic is impressed by my remote coffee making skills, something needed on every construction site, he tells from experience. On the construction site, Dominic and Gregor speak only Polish with their cousins and colleagues. Louisa and I have been pondering working in the construction business in the Summer – not only to make some extra money, but as a good gym substitute and because we would fit right in with our openness and humor, we assume. Dominic will let us know if they need helping hands and we exchanged numbers before we packed up and cycled on. Surely, soon ‘ZAPZERAPP’ won’t  be the only Polish word I know. 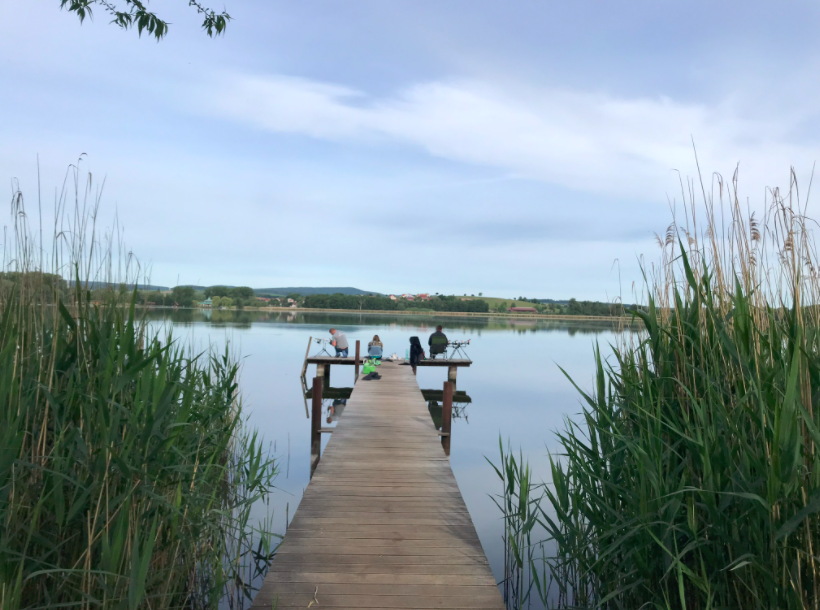 Gregorsz, Luisa and Dominic having breakfast together, after a refreshing swim.

Ebersgötzen sounds like a word you want to torture foreign German students with, but it is much more than that and believe me you will never regret having stopped here and taking your time, because in Ebersgötzen people rhyme. Wilhelm Busch – the famous German poet, painter cartoonist and most of all humorist and all time Bachelor with his entertaining attitudes towards the worrisome love, lived in this magical historic village. That is why the Wilhelm-Busch-Mühle (mill) is a place like there’s no other and I insisted in stopping there for a coffee. The old-fashioned restaurant opens at 11:30, according to the official opening hours. It was 10. There has to be someone, I thought knocking on the heavy wooden door. 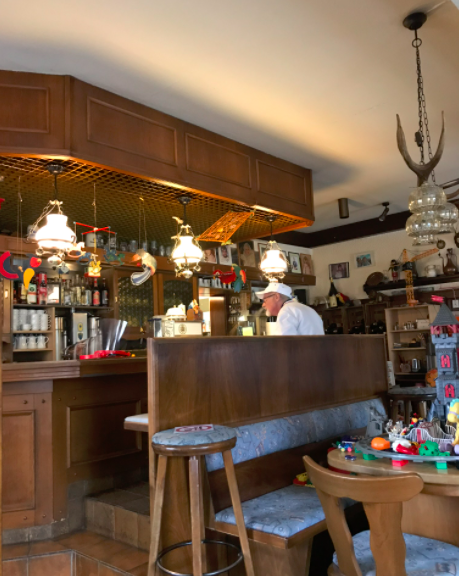 our new granspa in the first official restaurant for children in Germany, smoking at his bar. 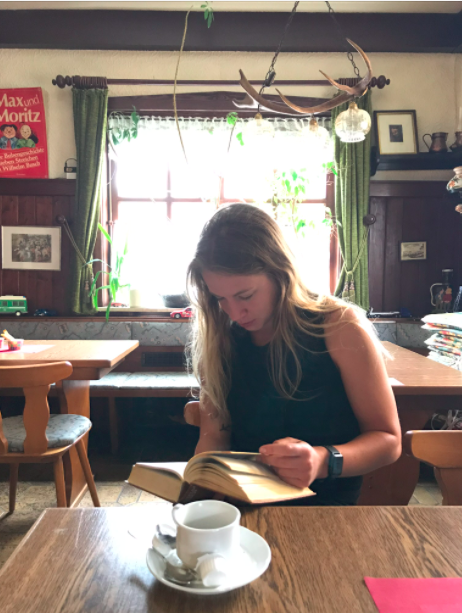 A white-bearded face leans outside the door with a questioning facial expression. Apologizing for the inconvenience, he interrupts me “What would you like to have?” – “Coffee!”, Luisa shouts from the side. The old man shows us a designated table, and sits down further away, maintaining Corona-distance at the bar. Smoking one cigarette after another, he entertains us with the stories of the great Wilhelm Busch and his teenage-friend Bachmann, the sun of the miller. In fact, Wilhelm and Bachmann are the true protagonists behind the famous prank adventures of “Max & Moritz”, one of the most translated children’s book in this beautiful world.

Thanks to my Oma, I am a Busch-fan, thus the bearded man and I bond quickly and it is only a question of time, until he takes out some old books from the shelf in the attic. ‘Der versimpelte Jungeselle’, is his favorite poem we learn and my voice fills the empty corny old restaurant with this entertaining story about choosing to remain single as a consequence of frustration of love. As a reward for my presentation we get some Christmas cookies, that he always makes for his grandchildren. It turns out, that the ‘Wilhelm-Busch-Mühle’ is the only official restaurant for children in Germany, were fun and silliness rule. Now, all the toys around make sense (the guns on the wall remain puzzling though).

I totally felt like home and as a recently adopted grandchild of the old white-bearded man. Luisa collects the dishes and puts them back on the bar as we leave, even though our new grandpa resists. ‘She works as a part-time waitress, she knows what she’s doing’, I reassure. The men starts to wonder, whether we would not like to join him, working at the big Christmas events at the end of the year, if Corona allows. Wow, we just got two jobs offered within one morning, just by approaching this world’s awesome people with an open mind and confidently. But the old guy gave us much more than only a job offer. He recommended us to walk down the windy little street to the original mill, where Busch’s best friend and adventure-companion used to live. ‘The mill is a museum now and Gisela is there now. She will show you around!’ Luisa and I, being adventure companions as well, happily follow this he recommendation. 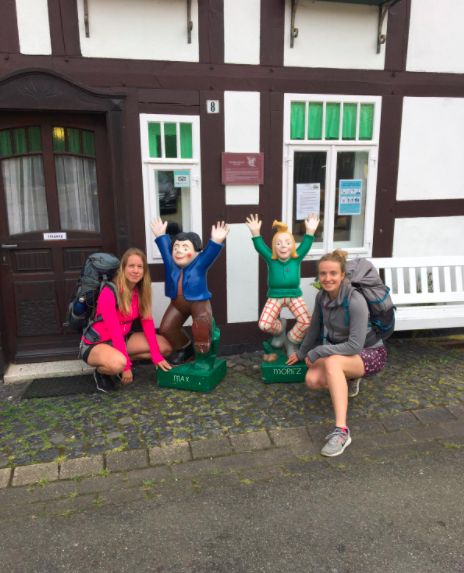 Jokingly, we were jumping around, speaking only in rhymes and acting like Bachmann and Wilhelm, imagining all the crazy fun nights, they had at this particular place, drinking from this particular glass of wine on the table. We were even given an example of how the mill works and I played a Christmas song on the old piano. 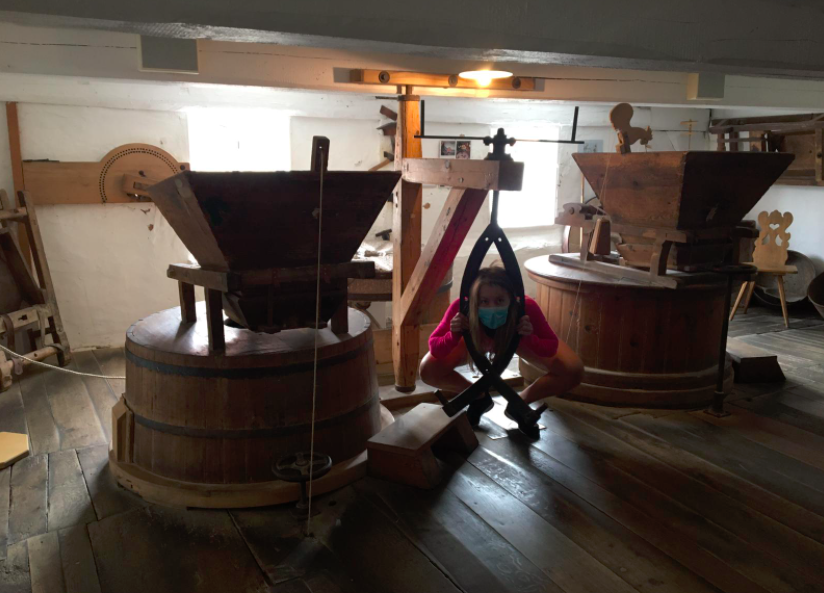 During this weekend bicycle trip, everything was unplanned and still, everything seemed to fall into place. Every new detail was embraced and accepted fearless and happily. To express it in the wise words of Wilhelm Busch: “Glück entsteht oft durch Aufmerksamkeit in kleinen Dingen; Unglück oft durch Vernachlässigung kleiner Dinge.“ – So, grab your bike and find your luck. 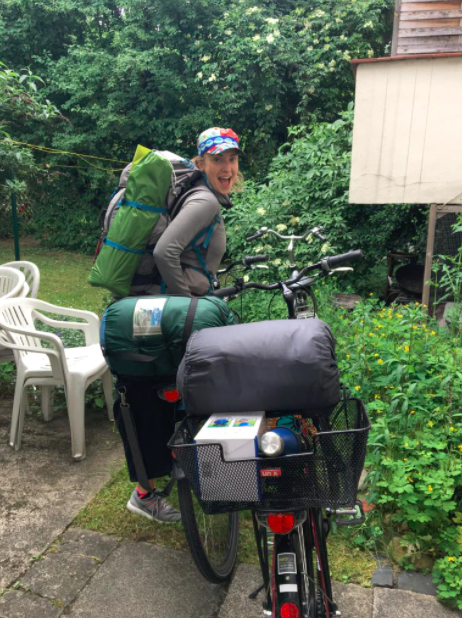 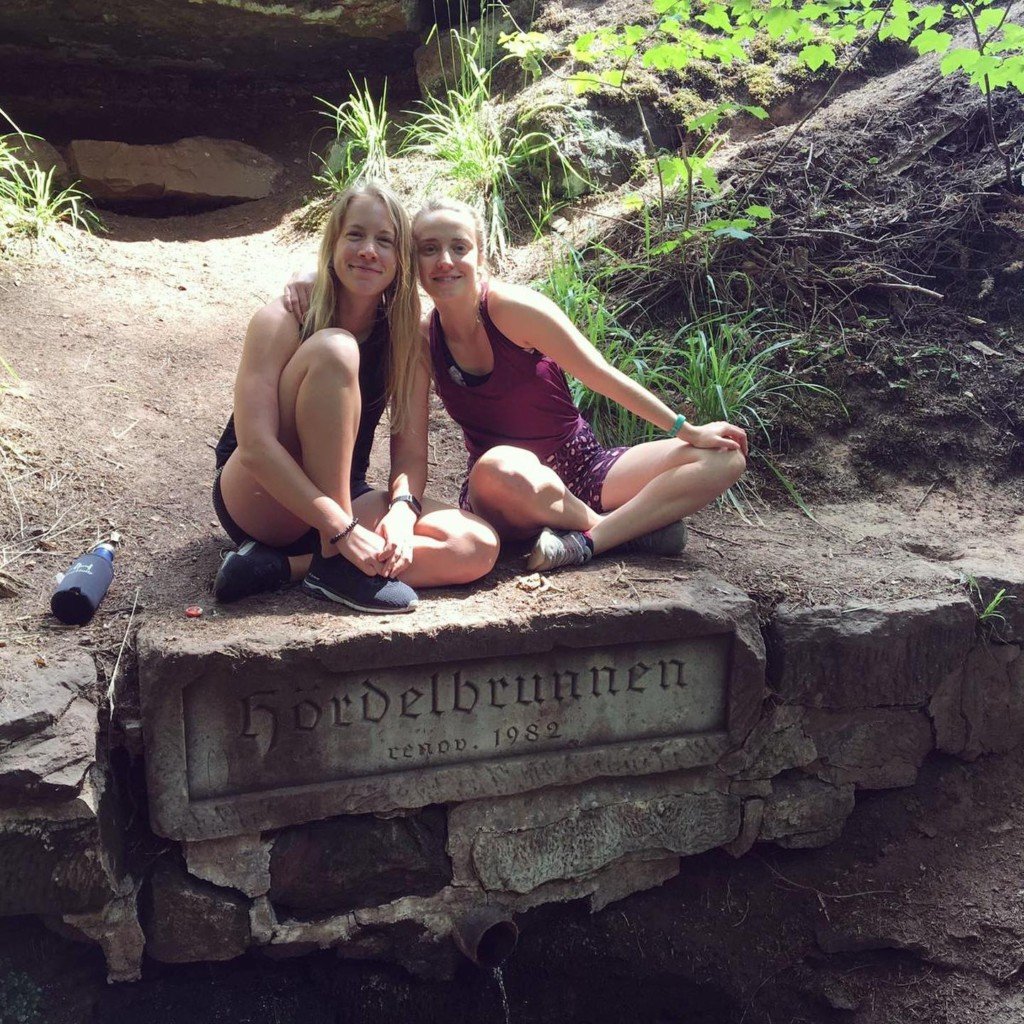