„A ты куда пропал?“ or rather “ where did you disappear too?„was what one of the Groundskeepers of the school asked me fleetingly on my second day back at school and well, I thought it would be fitting for this Blog post, since I have been gone from my duty in Armenia aswell as neglecting my blog duties. (He didn’t mean it as passive aggressively as it sounds like hah)

Well, ill just skip the things that happened in the time where I was non-active on here, because first of all know that not alot or no special things had happened and plus, it was in the past and I should rather report on things that are current… which brings me to this week really!

So I arrived back in Chambarack on a Wednesday and well, I decided to stay over the weekend because it would make me slip into life here again. And well, it did help! Towards the start of the second week I was bustling and busy like never before. Eline was pressing too because im a lazy Armenian learner and I had my own projects, visions and lessons which i wanted to complete and plan. But before I elaborate on developments there, I would like to address something.

I noticed that people here are extremely humble, for example, emma. She works a full day job, cooks basically every meal at home, cleans and makes sure everything runs smoothly and in school. Not only that but she often sits at home, late in the evenings after she had done every chore, reading german text books and planning future ideas and lessons. Its really insane how… committed? She is towards certain things she is passionate about. Not only does she care about students, but also fro a school as a whole, which brings me to a thing I was working on quite alot this week.

So a while back, Emma told me that she came in Contact with a Foundation in Germany which was looking to support and finance something for schools who needed upgrades in every aspect possible, and she asked me to help her out in matters of communication. Of course I agreed! It seemed like quite an interesting thing to work on. And well this week Emma told me that the foundation had sent her the Contract, how it was until now. I looked over it, explained it to her and translated a few parts she didn’t understand, because she then had to go to the director and convince him to be onboard and sign the Contract. We would be getting am Amount for 10 new computers (including mouse, keyboard and screen) and that would be quite an upgrade to our existing Computer room. SO she went to his office and talked to him about it before coming to me a bit distressed because he didn’t agree to the agreement. The actual terms were fine! The issue was how the transaction would proceed. Before the Foundation would give us the money, they would have to receive the completed contract between the school and the IT Company aswell as the schools bank information. The problem is that signing a binding contract without having the actual funds to pay for the agreement is in a grey area in the Armenian financial laws and out director didn’t want to put his financials at risk. After being in contact with the foundation nd the company about this problem, we came to inserting a clause into the agreement between the SChool and the IT Company which read that this contract will come into action after the school recieved the full amount of funds onto their bank account.

And well i wrote that contract between the school and the COmpany. It was alot of work haha and I was quite nervous because it was quite a sum of Money. After around two hours of formulating, thinking and using german words I haven’t heard in quite a while, we finally printed out three copies which the director and the bussiness owner signed in his office. One for us, One for the business and one original for the foundation in Germany. So now what we will have to see is if the foundation had updates their contract and when they will send it to us so we can sign that as fast as possible aswell to start the processing and transaction process. That happened on Thursday afternoon. There are quite a few other things that happend this week haha.

So I also started my Armenian lessons again with Eline. One good accomplishment though! I managed to finish the lst set of Letters in the Alphabet.  Yay! Haha, it’s kinda sad, but im very determined to further my Skills alot! We started to learn more specialized vocabulary in the upcoming lessons and im very sure that ill be getting into conjugating verbs in the diferent times aswell!

Aside from the two above mentioned things I also was planning a new project which will be written about and made part in a new page and got approve to continue my „Zerbrochenes Gemälde“ Project so that was quite an issue aswell. Here was a picture of my quite messy desk during the week haha. 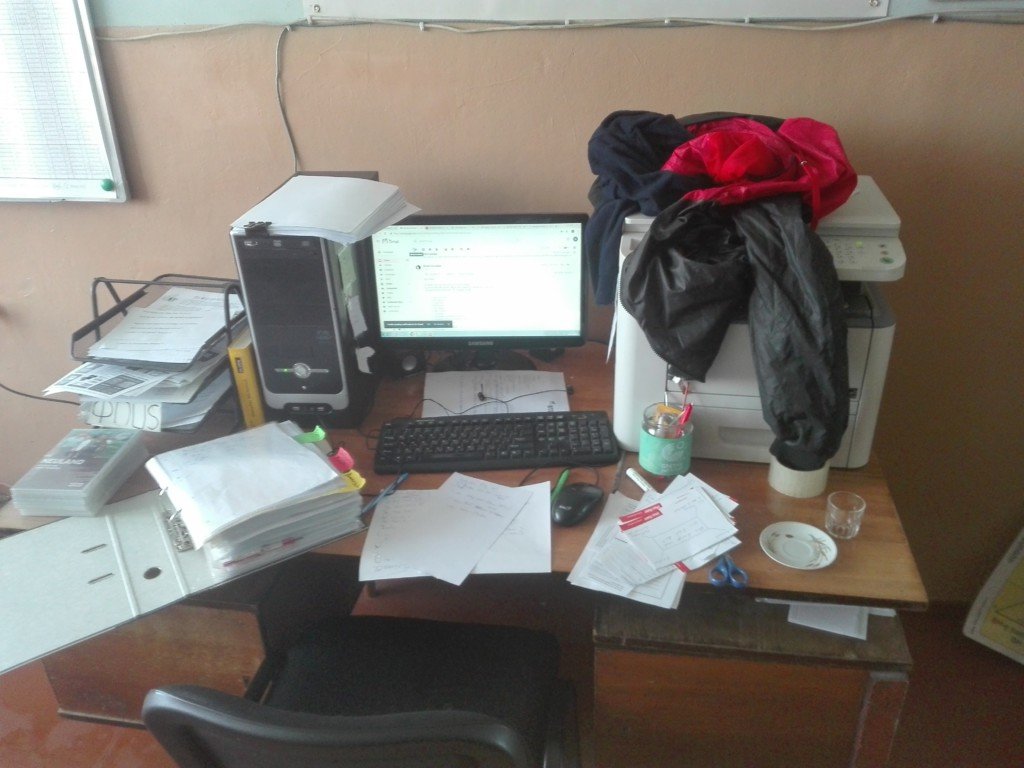 Oh and another thing that is finally happening here is that the snow is slowly disappearing. Last week and the start of this one still had the mountain sides in the distance and Chambarack being covered in a good amount of snow. From Wednesday on around, the sun started to show itself again after a long winter again and the snow slowly started to dissapear again. That though, brought up another problem. All the melted snow came down flowing through Chambarack, the football field in front of our balcony was quite swamped and overrun by water and streams of water was flowing over the streets and gushing down the nwely installed gutters. It probably flowed down into the direction of the Sevan lake. Here two pictures of that natural phenomenon happening. I think ill call it the „Great snow migration.“ 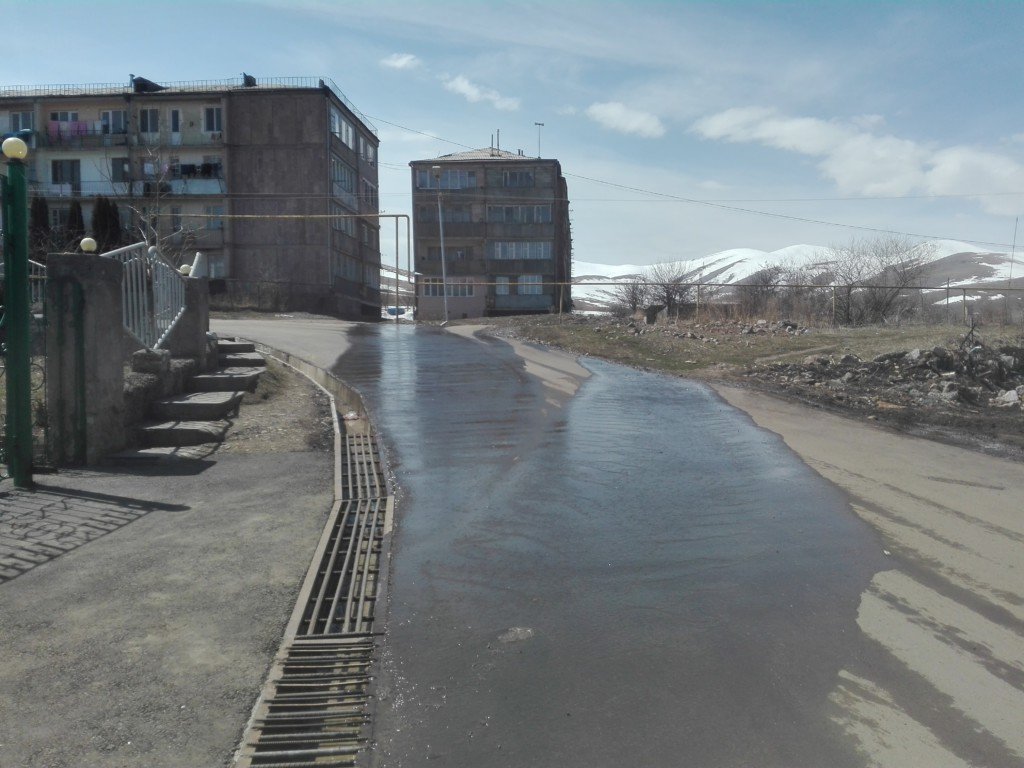 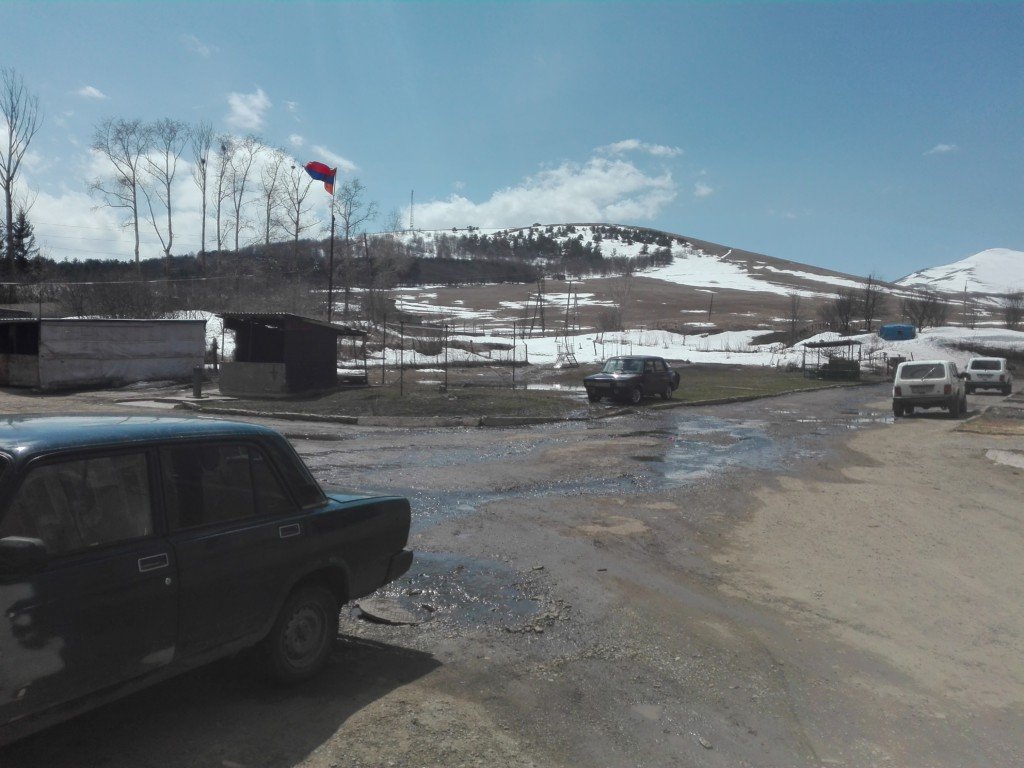 Otherwise, spring has really started to show! Things have started to bloom and grow while the Animals are out again aswell. Now groups of chickens roam the streets while new born calfes and their familys happily are outside. Ive even seen some Horses and goats roaming around! Ill try and take pictures when I can for the animals fans there! ( you know who you are)

Alright, so that was the week. Now to the weekend!

AS always, it started with me heading of to Yerevan. That happened when Tigran, Emmas son, took me with him after I finished writing the Contract between the school and the IT Company. He took me with a friend of his, she was really fucking annoying haha if I may say so and I hope they don’t read this, back to Yerevan where he even called me a taxi to take me to the aprtment , because I didnt have internet on my phone. Heres a picture of the Gas station we stopped to tank: 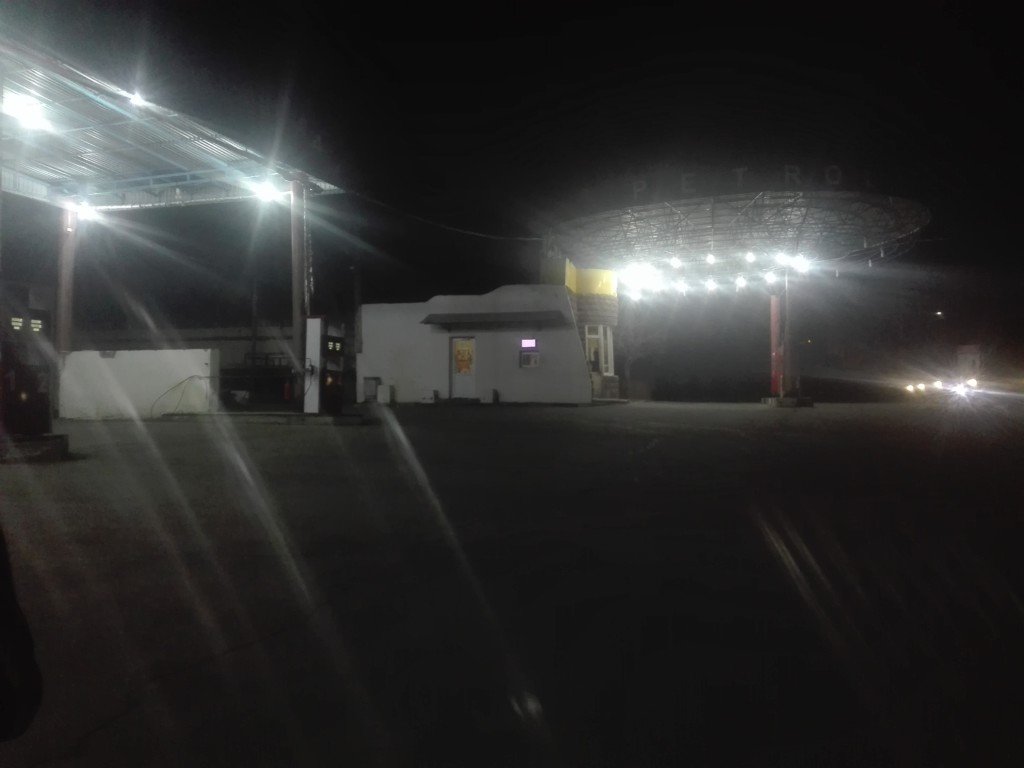 I had some plans for the weekend which where:

Go to the Goethe Centrum and return a book while also taking some cds which broke in Chambarack to replace them.
Go to Vivacell MTS and get a Simcard to fit my old phone because my old one had broken and the slim slot was too big.
Have some fun!
Now to how those plans worked out!

I went there on Friday and did exactly what I needed to do! Now ill just have to replace the audio and make sure that the CDs i took are the ones we actually broke h.
Somewhere during Friday evening with a talk with Elisa I think, I brought up my prolem and she blurted out that she had like a SIM stencil where I could just put my Simcard in. She went into her room and soon after brought me back the stencil. It fit after a bit of work nicely and now im back to my old moile plan! Stupidly, I realised that I had exactly the same stencil in my backpack in some corner, hidden away haha.
I did, i had a good time catching up with Kira, Martin and Elisa again. We went to a PASCH event, got drunk and went out and of course cooked together, below is a picture: 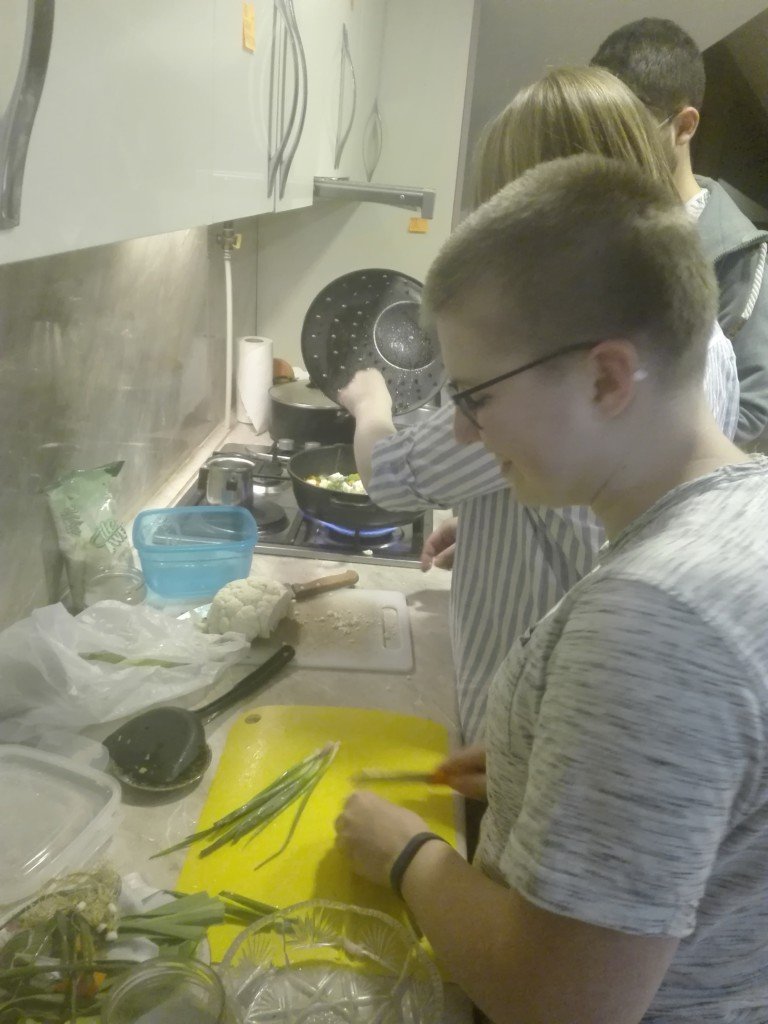 (Hope they dont sue me)

So in general, it was a pretty good Week! Just very busy and alot of work and things to do, good and bad haha. Well, I find that this Blog entry is written a bit weirdly so I promise to make the one next week as it was before!