So after the adventure in the south, we had two days of like National holidayisch days in Yerevan since they  had an Event called Frankophonia, literally a big conference dedicated to like the french culture and language. It was so big that even Prime minister Macron and Justin Trudeu came to visit , it really was crayz haha. The hospitals where only partially operational and schools got the days off.Now the on Saturday, the 3 out of the 4 other volunteers in Yerevan decided to take a small road trip around the capital and look at a few things and just have a good day. I decided to join that group and we became a 4 man squad.

SO the day started with us dipping and renting the car. pretty obvious haha. WE got into the car and drove a bit and noticed that we gotta tank so we pulled into the station and then one of the service employees started to fuel up and one of out members started freaking out and was like : we gotta dip out of the car. First we were really confused but then she said that they where tanking gas ( pretty normal in Armenia) so we where like “ yes if thats the case we dip but can you smell that? Thats gasoline haha“ so that was resolved. So we drove on, with a full tank, and then we followed google maps which turned out to be a mistake since it led us to streets which didnt exist or where like too small and crammed . So we looked at the map without using directions and of course we found the way onto the high street 🙂

So our first stop was Khor Virap, A old monastery which used to house the imprisoned Gregor the Illuminator haha.  below is a picture of all 4 of us doing weird things on the top of the Hill where the monastery lies on. Three weird faces and one weird person taking the picture. 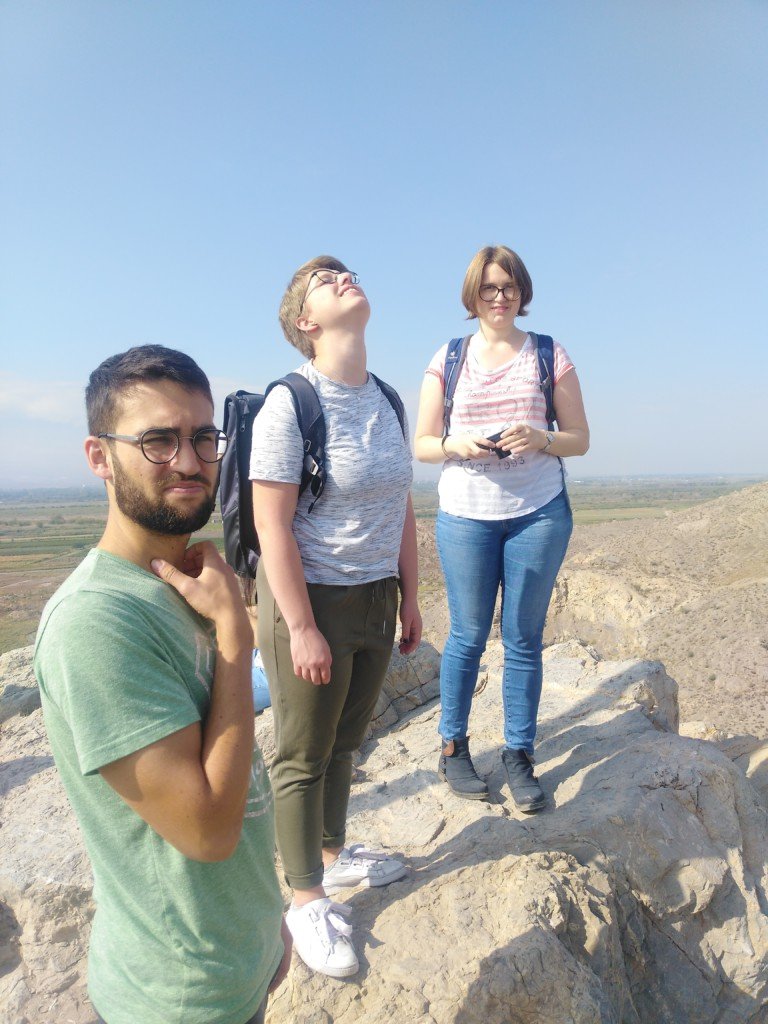 Now at the parking lot the locals where selling the usual stuffs. Souvenirs, religious items and food , so we indulged our self in some Gata, not the best but it did the job .After the we got onto the highway again and drove off to Zvarnots Cathedral. the cathedral was either destroyed by the invading hordes or an earth quake but the ruins are still standing, which already show how beautiful and impressive the whole building would’ve have been. We got in free with our little volunteer cards which had “ UNESCO“ on the corner so we cool like that. We walked through the heat and popped into the museum and looked around there for a bit before popping back into the car.

I dont really remember what we wanted to do after that but we all kinda wernt feeling it so we started heading to the one weird destination on our check list: The Metsamor nuclear powerplant. And as you guessed as we came to about 2 kilometers of it, there was a military check point, and we, the tourists asked the soldiers if it would be okey if we could visit the power plant. Lets just say that as we drove of we all knew that the soldiers would all be having a good laugh after turning us back haha.

Since out little radioactive plan failed we searched for alternatives and since we knew that we were close to one small town another team member of ours was working it, we decided to visit her school and a bakery near it for a small break. I do not know how the small city is called again but the school was nice enough from the outside ( it was locked , a sunday haha ) and the small baked goods we got from the bakery next door where bomb aswell.

So after a small break we updated out plan and decided to make it to the Alphabet Park, a park with small monuments of the Armenian alphabet ( they are very proud of it) untill sunrise. So we drove on again ( I apologize for the stale Blog entry haha) and right before we reached the Park we didnt manage to get off the highway at the right exit so our arrival was delayed by 20 minutes or so, making us miss the sunset. Buuut we did have enough light to make a little fun thing with the monuments. We decided to each take out pictures which each letters from our names so we coul arrange the pictures in such a way that they would spell out names in armenian. Now sorry to let you all down, but i dont have the pictures yet since they are on the camera from Martin,another Volunteer. But i assure you, as soon as I get them ill post em, and you all wont be dissapointed xD

So after that, we kinda where being harrased by some stray dogs which was fun haha but we all survived in the end and we drove off to our final stop, The Observatorium near Yerevan.

After a small complication involving us calling the observatorium for us to get into the place earlier we decided to stay and wait in the Parking lot . There we ate our food in the car haha. We chilled in the car, looked at the stars and just relaxed after a long day. When it was time to go in the guide even spoke english just for us even though there was a mob of Armenians. We found out a few cool stuff too. The telescope they where using for us to look at the starts was german and made out of paper maschee because it had some component to it which had some low like thing which helped us look at the starts better haha, it was probably taken by soviet soldier during their retreat back from WW2. Anyways, after that long day we made it back to the city and enjoyed a good nights sleep.